We recently heard an economist's opinion to never eat in busy business centers of a city, due to high rents, competition and trendiness. These establishments have a tendency to be watered down. He stated restaurants that are hard to find, even for locals will be much better. We actually didn't hear about his opinions until after our return from San Diego, but while visiting we did find ourselves on the hunt for a little out-of-the-way Filipino food just two neighborhoods from the Mexican border in National City. Due to a big percentage of Filipinos being Catholic we called ahead to find out if restaurants would be open and what time the first lechon pig would be ready.

After a lovely day touring Balboa Park we decided some suckling pig was exactly what we needed and headed to National City. National City looked more like the Southern California we envisioned with wide boulevards littered with strip mall after strip mall surrounded by brown hills. We arrived at Porky's Lechon and Barbeque at 5:09pm to find the tiny restaurant closed. We even called that morning, but forgot to ask what time they closed. Not to worry National City had Filipino restaurants everywhere and on the way we had noticed what looked like an old Village Inn Restaurant building with a large sign saying "Villa Manilla - famous fried chicken". The strip mall parking lot was full, but the restaurant was fairly empty. We were unsure if we were making a good decision, but the waiter was so nice and we were already there so we sat down and decided we would make the best of the situation. The menu was foreign to us, which made it even more exciting. There was no suckling pig however, so we opted for their famous fried chicken and some sauteed pork belly.

The pork was palatable, dry and smokey, but nothing spectacular. The fried chicken on the other hand was delicious. Villa Manilla boasted their chicken was not battered and came with banana ketchup. The lack of batter actually made the skin the highlight, crispy, crunchy and flavorful. We quickly declared this fried chicken to be one of the best we've ever had. We may not have been successful getting some Filipino suckling lechon, but the fried chicken made us feel as if the evening wasn't a total bust. 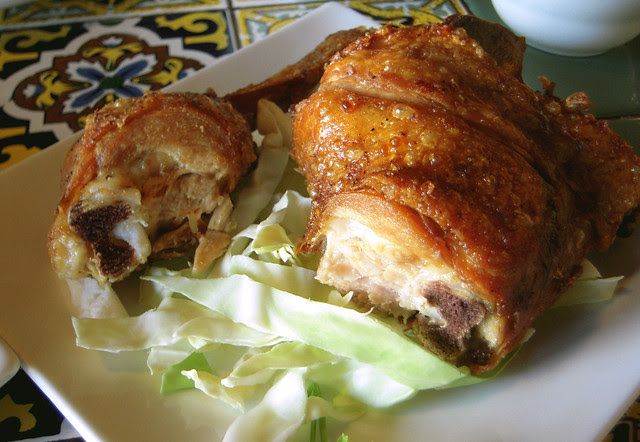 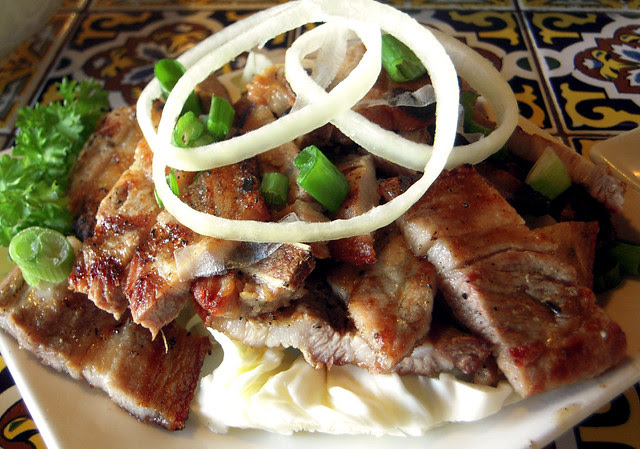 We took the quick bus ride back to the hotel and enjoyed a late night chocolate cake and old fashion cocktails, so all in all a nice end to a lovely Easter Sunday.
Posted by Buddha Bellies at Friday, April 20, 2012