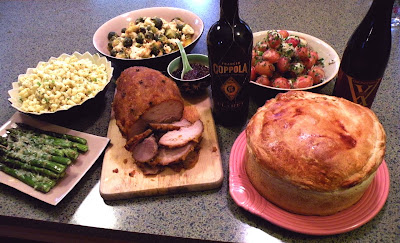 Holiday themed dinners are great. It takes the guess work out of deciding a reason for having people over and what to make for those people. We are fortunate enough to have friends who love to cook and eat as much as we do and we'll find any excuse to do so.

Since spring doesn't officially start until third week in March we'll start there with our springtime themed dinners. First one of the year - St. Patrick's Day. Ok, so St. Patrick's Day barely makes it onto the springtime list, but after the winter holiday meals, Valentine's Day and Marti Gras we can say it's usually the first official reason to get together and celebrate for the sake of celebrating. 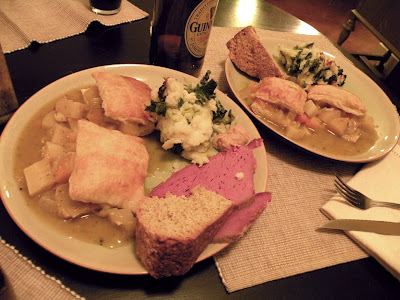 This year we made a to-die-for corned beef. Seriously it was amazing! The meat was tangy, tart and very tender. Since we already had colcannon (Irish fancy mashed potatoes), vegetable pasties and Irish soda bread, we decided to make the corned beef in a crock pot and not make any of the usual potatoes and cabbage. It was fantastic and went wonderfully with the spongy, light and dense soda bread and cabbage mixed colcannon! 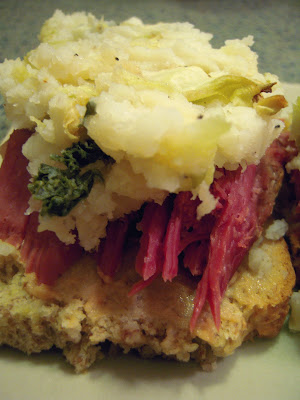 The vegetable pasties were a modernized version of a typical pub pastie. Using mainly root vegetables, the firmly cooked vegetables in a light gravy wasn't heavy and allowed the puff pastry top to remain firm and crispy. The peppery starchy vegetables balanced really well with the potato colcannon and soda bread. 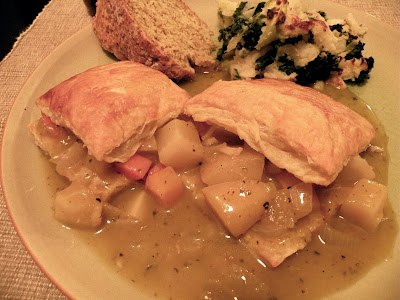 Next up was Easter. Which was a fun holiday to celebrate food-wise. This was an all adult themed Easter, so no egg hunts or chocolates. Instead we had bottles of red wine and a DVD of the Godfather. Everyone said the same thing about the Godfather - "I've seen parts of it". Well it truly is a great piece of American cinema, so many great quotes:

"I'm gonna make him an offer he can't refuse."

"It means Luca Brasi sleeps with the fishes."

"Leave the gun. Take the cannoli." 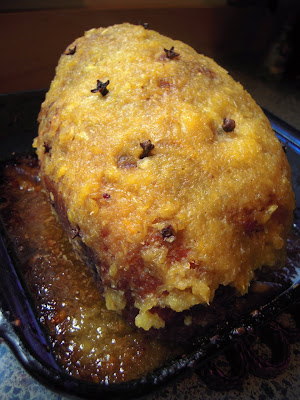 We decided to make a ham. We've never made a ham before and we learned nobody makes a ham, that's left to the professionals. People simply heat up hams and gussy them up with fancy things like pineapple glazes. So that's what we did. Doesn't it look like a ham gussed up with a pineapple glaze? 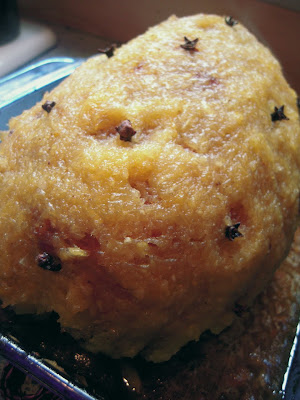 Easter to some of us pagens in the room means celebrating with spring items like asparagus and eggs. We decided to defrost some items from last fall and made a cauliflower and brussel sprout gratin that was light and creamy, sort of reminiscent of spring. It looked springy at least. 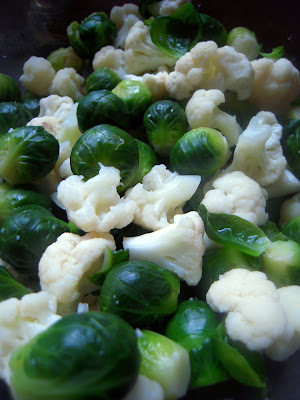 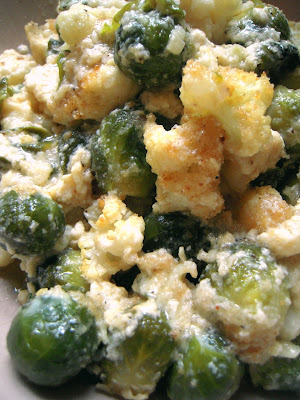 Our friend brought over an Italian Easter Pie to help celebrate. This impressive tall all around crust pie was filled with light and delicious spring items like the before mentioned eggs and asparagus, as well as leeks, peppers and cheese. 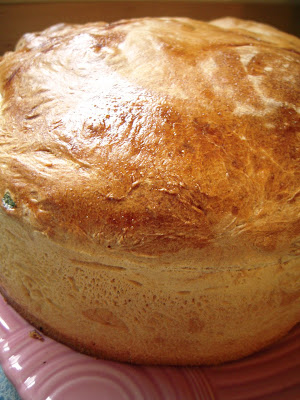 The side dishes consisted of simply roasted asparagus, a creamy red potato salad and southern style macaroni salad, mainly to go with the ham. 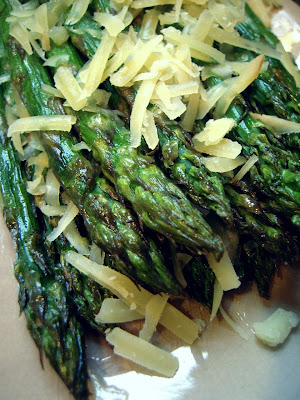 We had thought about going to an Easter Brunch, which are usually great with all the fresh early spring vegetables, but this year, boy are we glad we decided to skip the brunch and make our own! One of the best Easter plates we've ever had. The wine and the Godfather movie only enhanced it all. 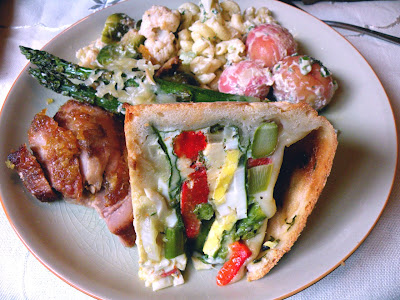 Our latest and greatest Spring Theme Dinner was our Ocho De Mayo BBQ. Since Cinco De Mayo fell on a Wednesday and the following Saturday was a gloriously beautiful sunny day we decided to wait and celebrate the faux Mexican celebration on the 8th, instead of the 5th. And we started the celebration off with a bike ride to our neighborhood carniceria for some supplies and beer! 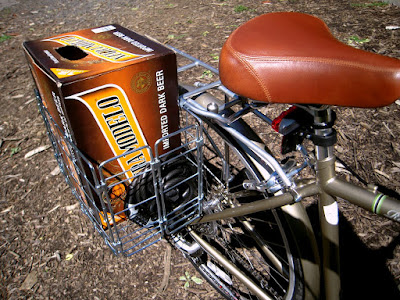 Our contribution this year was an authentic take on chili rellenos. No fatty cheese filled deep fried chilis for us! We were inspired by a Rick Bayless's Everyday Mexican episode where he sampled the best street food in Mexico City. What was that? Street food? Where? Mexico City? We're on it!

This verison of chili rellenos consisted of roasted chilis that are then stuffed with a grilled onions and soft mexican cheese mixture, wrapped in corn husked and grilled again. This version is far superior to the traditional batter dipped deep fried version. The roasting of the chilis prior to stuffing them with the cheese mixture allows for the robust flavors of the chili to be the star of the dish, only heightened by the smokey flavors of the grilled onions and tangy cheese.

The grilled onions are taken off the grill to cool and then mixed with the cojita cheese before stuffing into the roasted (now skinned and seeded) chilis. Wrapping the chilis in a corn husk allows the grilled onion/cheese mixture to slowly melt into the walls of the roast chili. Seriously delicious stuff, what real street food is - simple, flavorful and not full of bells and whistles. 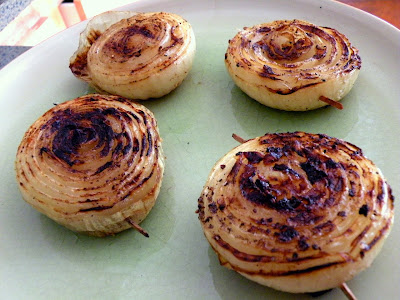 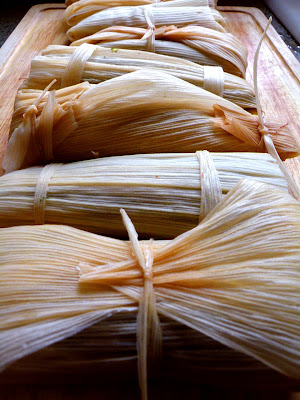 There were enchiladas, beans and rice, and we made a spanish pasta dish fideo, just in case we needed some more carbs to go with the negro modelos! 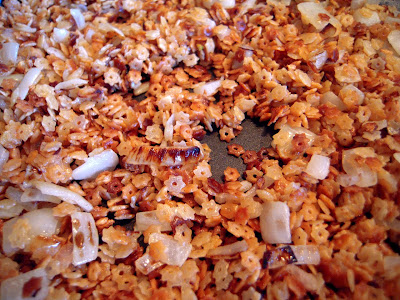 Oh and Mike made his famous roasted pineapple salsa and we grilled chicken. All of the leftovers made for a serious plate of nachos the following Monday. 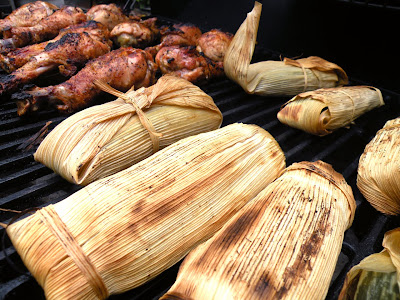 We'd like to try a Passover or Seder dinner next year, we're thinking a brisket and matzo ball soup. What do you think? Wanna join?