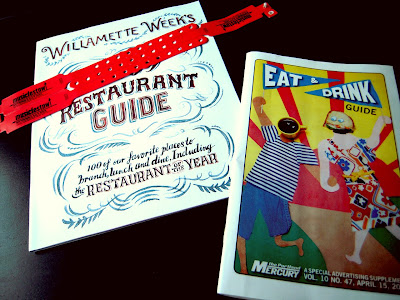 Neither of us work downtown anymore and the areas where food carts like Cartopia on Hawhtorne Boulevard or the Mississippi Market Place aren't within walking distance to where we work so food carts aren't a part of our dining scene. Although we wish they were. We visit them when we can and make special bike detours to visit particular ones we hear a lot about. But unfortunately we seem to collect names of food carts we should try more than actually visiting them.

Well that was soon remedied with the Willamette Week Newspaper's annual Eat Mobile Event where 30 food carts are packed underneath the Morrison Bridge for an evening of gorging yourself on the best food Portland's mobile food scene has to offer. 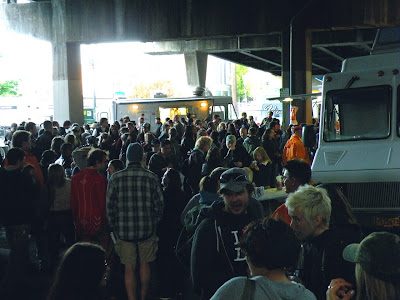 For a meager $7 we were given 3 hours to indulge on the best each food cart had to offer. Kudos to the Willamette Week for organizing such a great event and for re-using the North By Northwest wrist bands! Oh and double kudos for having a capacity limit, nothing worse than waiting in painfully long lines for a few small sampler bites. With limits on the number of people allowed we were able to grab and head on to the next cart line while eating our sample! The lines were sometimes long and sometimes we had no idea what we were even in line for. 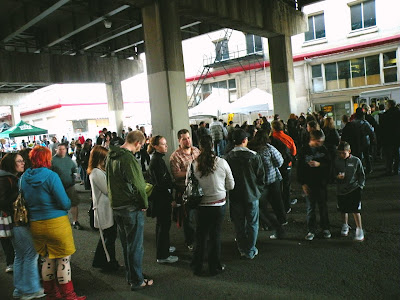 Honestly that was one of the best parts of the event, get in line, don't worry what cart it's for, it's going to be good. Unless you are a vegetarian than you may want to skip that very long line for carne asada.

Was the food good? Amazingly good. Each and every food cart put their best foot forward. We are paying particular attention to the food cart scene for personal/business reasons, and the one thing we are learning quick is that the carts that get the most buzz offer only one or two standout items. And they do those items very well. For example - People's Pig, speciality item - Porchetta! 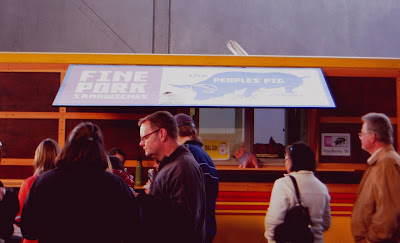 We have been hearing a lot about this guy's fatty, savory Italian inspired pork roast, wrapped in panchetta bacon! This line was a long one for the sample of the much talked about pork with red cabbage on a tortilla. Delicious, but a bit sloppy wet from the cabbage and if we waited too long the juice from the pork and cabbage just disintegrated the tortilla. 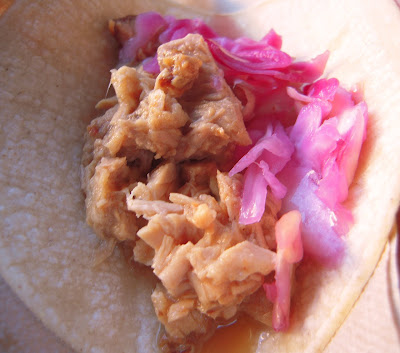 We followed everyone's lead, got our sample and quickly got in the long line right next to People's Pig for the Flavor Spot's waffles wrapped with pork sausage or chocolate, strawberries and whipped cream. We've been to the Flavor Spot's cart numerous times and decided to get out of line and head over to another cart, but karma was on our side when a vegetarian friend accidently grabbed a sausage wrapped waffle and offered it to us. We can't shake the incredible waffle we had in Bangkok, Thailand on the skytrain platform, even though Flavor Spot waffles are good, they simply can't compare to our Bangkok waffle stand who is the current champion of waffles in our hearts.

Next up Stuffed Sopapillas from Nuevo Mexico, a cart at the Mississippi Market Place, we'll make it there someday and not when its almost midnight and all the carts are closed. We sampled their carne adovada and chicken sopapillas, which tasted as rich as the red sauce looked, another hit! 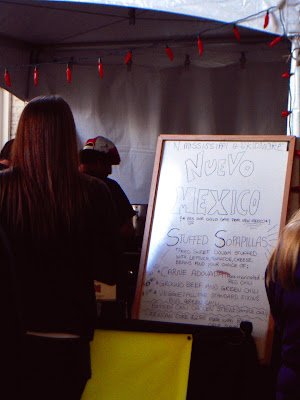 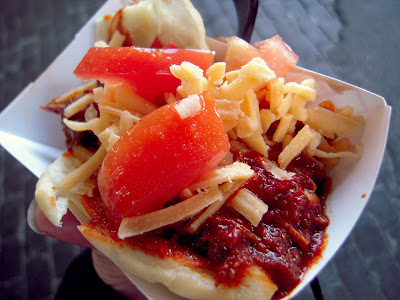 Now we don't plan to list out all 30 carts, we might if we were able to capture good photos, but most of the time we just crammed the food into our mouths before we could even pull the camera out. Towards the end of the evening as we were beginning to feel full, we did manage to wait a few seconds, take a photo and then cram the food into our mouths.

We had raw juices, a fantastic potato and blue cheese soup, a dynamite lamb stew, a lentil soup offered up with slices of grilled cheese, a vegan African safferon rice with yellow lentils, stewed greens and your choice of fake chicken or pork. We had terrific bruschettas with chunky green pesto and a sundried tomato spread and goat cheese. 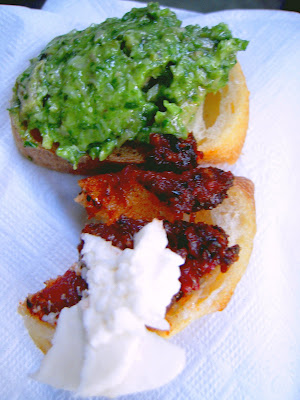 There was hand cranked ice cream, falafels, smoothies and even sausage and sauerkraut. 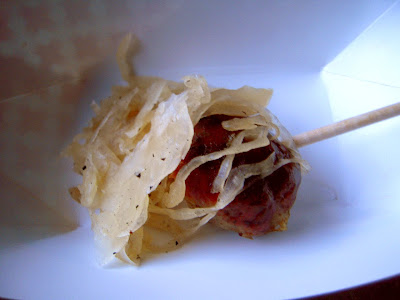 Of course this wouldn't be your typical Portland hipster event without beer and when I say hipster I mean Pabst. 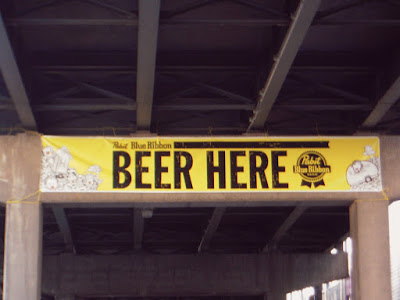 Interestingly enough the beer tent was mostly empty most of the time. People were too busy queuing up in line for food, but that was easily rectified with girls walking around offering up beer and wine while we were in line. 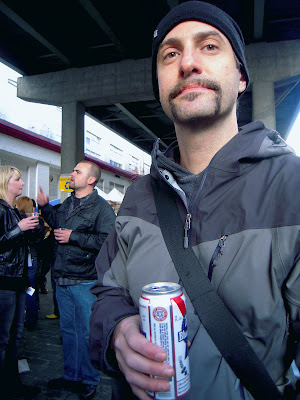 We had made a particular effort to go to this year's Eat Mobile because particular carts were participating and one of those carts was the People's Pig we mentioned earlier. The other was Koi Fusion, a Korean taco cart that tweets its location each week, they don't have a permanent spot and we don't tweet! So we made our way through one end of the tasting area and headed back towards the other where Koi Fusion's hip blue/green mobile lunch truck was situated. 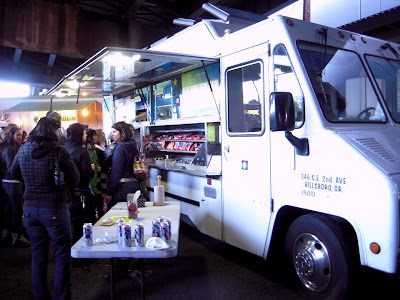 These much talked about beef bulgogi tacos topped with spicy kim chi were a major hit. They were tasty and the trendy truck oozed style. It reminded us of the lunch trucks in Hawaii parked next to beaches offering up soft served ice cream, plate lunches and a hard to resist row of grab bag chips. Koi Fusion's taco were really good. The rich bulgogi beef and kim chi were a great combo, who would have thought? I guess a bunch of people because bulgogi/bookogi/bulkogi and Korean BBQ are a big thing on Portland's food cart scene. We haven't tried any other Korean carts yet, so it's hard to compare and on it's own Koi Fusion's tacos were fantastically different and a great addition to our list of food obsessions. 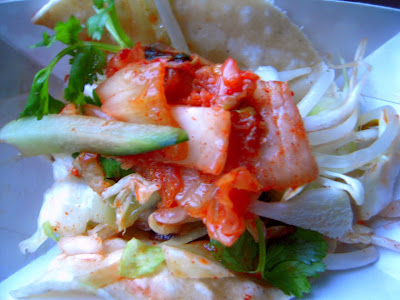 While we were in the long line for Koi Fusion the cart next door was offering up beignets in chocolate sauce - yes, please! A little slice of creole french heaven in a cup, a little sweet ying to all the savory yang. 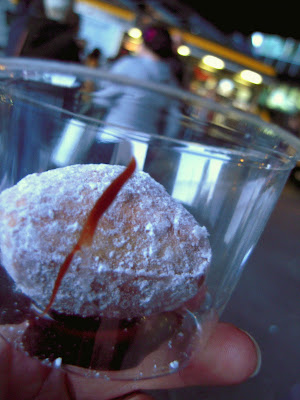 To top that off a bicycle mobile coffee cart appeared at the entrance as everyone was leaving. Man, they thought of everything. What else could be more wonderful than a warm cup of coffee before a bike ride home? And this wasn't pre-brewed carafes of coffee, those carafes at the bottom held hot water and the coffee was brewed on a camp stove in a percolator. Now that's how you feed a crowd of coffee lovers. 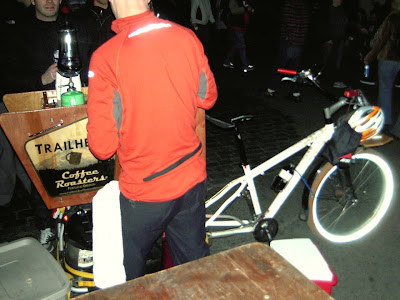 So it was nearing the end of the evening and the carts were slowly closing due to having run out of food and there was still our vote to cast. Each person was given a clear stone at the entrance, which we were to put in a mason jar at each cart which would then be tallied and the winner with the most votes would be announced later. It didn't take much discussion for us to decide that these carne asada quesadillas were the tops. The smokey carne asada and melted cheese were spot on, but the clincher was the red and green sauces offered on the side. 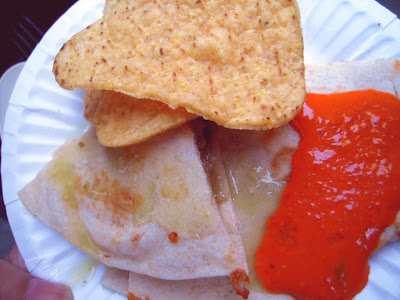 We were very surprised at our choice. A quesadilla, really? Something that simple and offered up everywhere in Portland? Yes, these ladies were adorable and took great pride in their food and when we raced back to the cart stand and saw the name of the winning food cart we were like - ahhh...that's why. 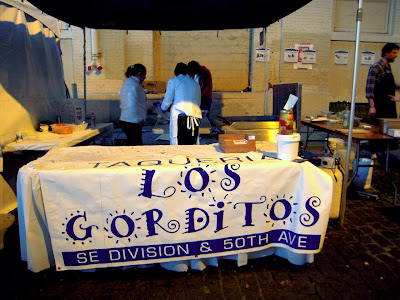 As the sun was setting and the wind picked up to we got on our bikes and started to head home along the east bank esplanade. With the city to the west along most of our bike ride home we got to thinking about all the great food there is in this city. How the local government has gone to great lengths to allow food carts to thrive here. How we 've surpassed other cities as far as local business, variety and quality of the food we have and in mobile food carts even. 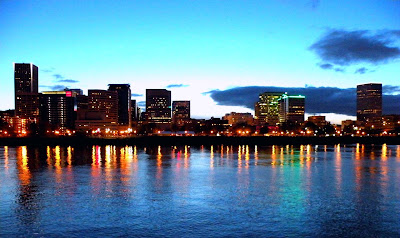 Eat Mobile was so great event on many levels. Everyone, and we truly mean everyone was so nice. The vendors, the people working the event and the people attending were all so nice, mellow and patient. It was a crowded event with many people turned away at the entrance when we arrive only 20 minutes into the event. No one got upset at waiting in line or if someone grabbed a couple more samples for "friends" in other lines, and always saying politely "sorry" if you were accidently bumped by someone trying to get to the next line. Portland is truly great that way.

Winner of the Carty Award, judged by a panel of "world-class panel of food luminaries" assembled by Willamette Week and the International Association of Professionals - Garden State