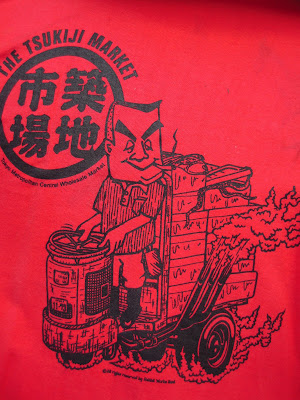 But first things first – we must visit a little shop in the fish market that made knives –world famous Masa Moto knives.  The best knife alchemist in the world. Thousand years of samurai knowledge transformed into kitchen blades.  Blades that do the cutting for you. 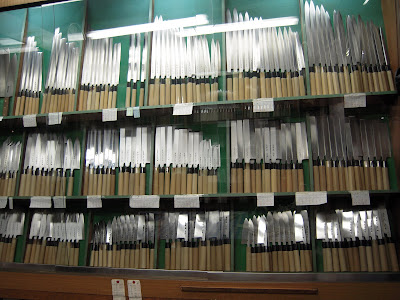 A few years ago we had fortuitously found a Masa Moto sushi knife in New York City's Chinatown off of Canal Street.  Unbeknownst to the Chinese shopkeepers the knives were under-priced and as we excitedly purchased the sushi knife and contemplated buying a Masa Moto clever selling for a mere $225.  When we returned to purchase the clever, the shopkeepers had raised the price and we decided against it and vowed to see the makers themselves someday.

What makes a Masa Moto knife so special? This question can be quickly answered when you hold one in your hands, but technically Masa Moto knives are handmade from a single sheet of carbon steel, hand folded and pounded until razor sharp.  Unlike other knife brands such as Wurstofs, Henkels or Kershaws, Masa Moto knives are not poured into molds, each one is handmade.  We have had an 8-inch vegetable knife on our wish list for several years and that was what we set out to buy. 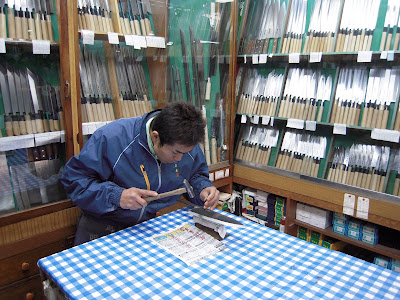 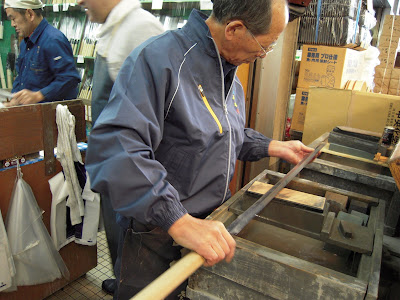 As we turned the corner from the main fish warehousing area to an alleyway lined with small shops selling all things related to fish including knives.  It took us a few moments to spot Masa Moto’s shop due to the kanji linen sign. 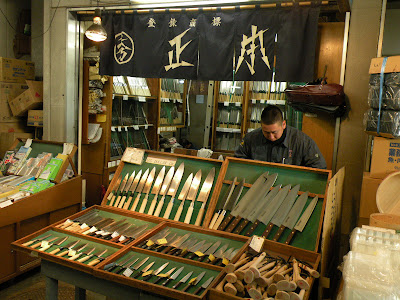 We began picking up knives and immediately accessed how much cash we had.  It was bit overwhelming being surrounded by knives of every shape and size. 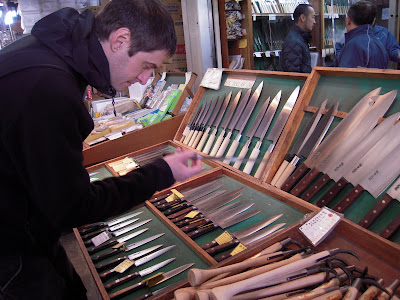 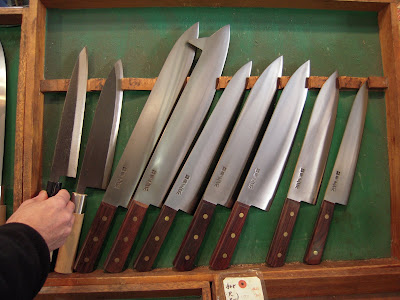 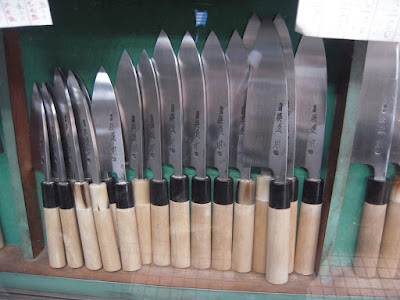 We chose an 8-inch vegetable knife and a 10 inch chef’s knife.  Beautiful kitchen instruments that made us want to head back to the states just so we could cut something to eat.  But it will be another 4 months before we can embrace the power of our new blades, so we headed out to do the second thing we came to the fish market for – to eat the world’s best sushi.

We paid for our knives and was told to come back in 20 minutes while they sharpened them. 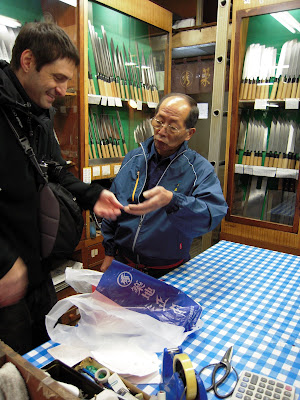 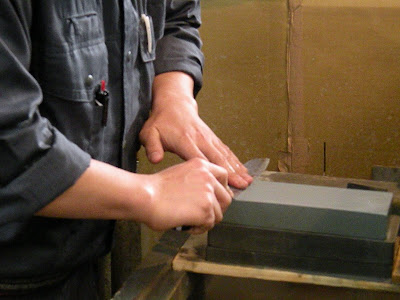 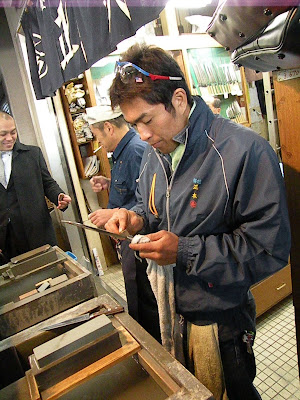 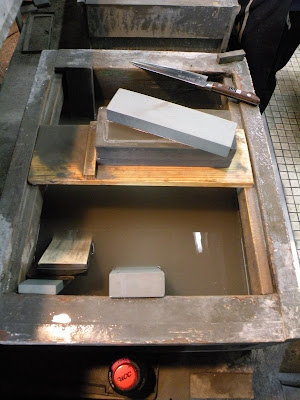 In the alleyway behind the knife shop was a row of small sushi shops selling the best sushi in the world and we quickly got in line for a small shop that called our names. 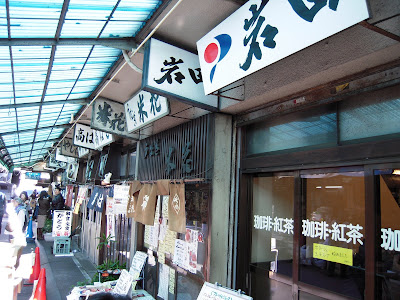 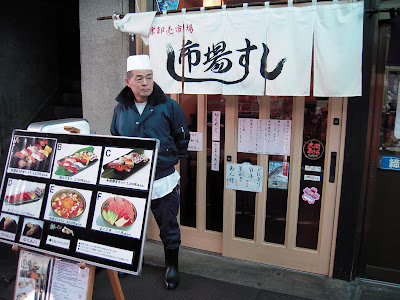 The sushi shops were all competitive with elaborate picture menu boards in front. 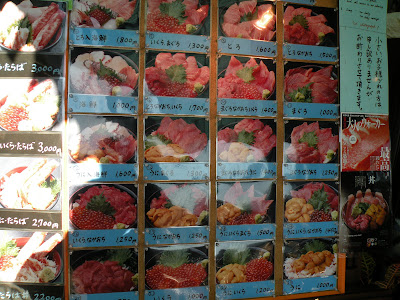 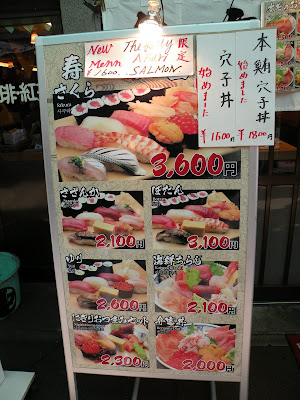 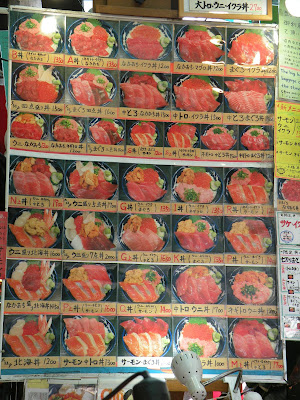 We waited a few moments and was quickly seated at the tiny sushi shop, that sat maybe 15 people at a time.  The menu was set to for either 8, 10, 12 or 20 pieces of nigiri - chef’s choice.  We decided on the 12 piece selection.  We didn’t know what pieces of sushi would be served to us, but we had faith that it would be the best.  We were immediately served miso soup and tea. 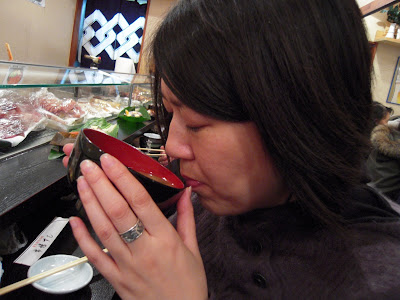 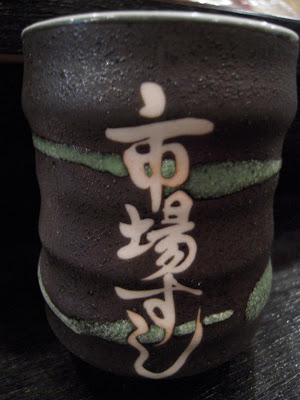 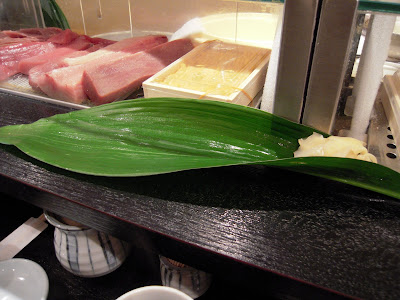 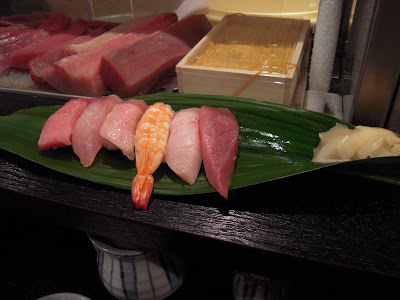 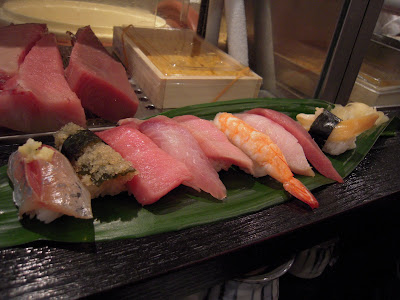 And enjoy we did.  There is no need to describe how delicious and far exceeded any other sushi we have had.  It is the best sushi we have ever had and will ever have until we return. 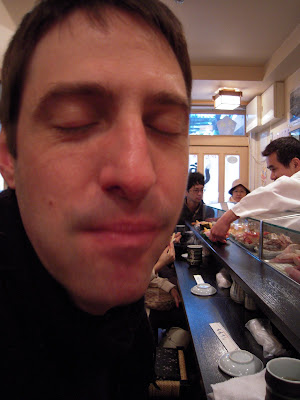 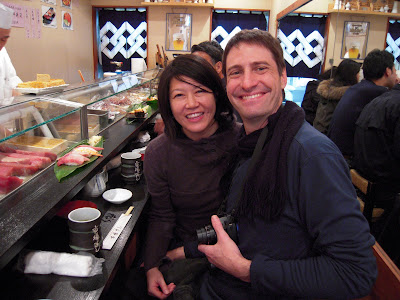 the lowdown from Carly Brown said...

Wow, that rocks! I love the happy fish-eating looks on your faces. Fish kisses to you...

K, NOW I'm envious, jealous and totally desirous about your trip. You guys look so HAPPY and full after eating the world's finest sushi.

Tell you what, you can send those knives to my house and I'll take good care of them for you. You know, cuz I'm such a good sister and all. ;)