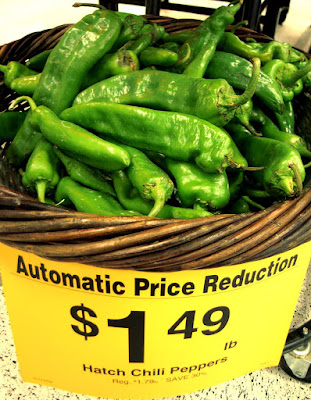 Late summer and early fall is when New Mexico's annual chili harvest occurs. Imagine the smell that is in the air right now across New Mexico. We live in the Pacific Northwest, but in our hearts we can imagine what it must smell and look like right now. You see New Mexican chilies are very different from the Asian and Caribbean chilies we cook with. And yes, they are handled completely differently.

We heard a rumor from friends who once lived in Albuquerque that our local grocery store Fred Meyers gets a bunch of Hatch chili peppers in late summer/early fall and they go fast. So when we spotted the New Mexican green chilies in a basket off to the side at the end of a miscellaneous aisle we spent the next 5 minutes picking through the basket for the firmest, greenest chili in the bunch.

New Mexico has an incredible variety of chilies, Hatch chilies are the most common and look similar to Anaheim chilies, other varieties are the Sandias, Big Jims and New Mexican Reds. We immediately went home and roasted our chilies. 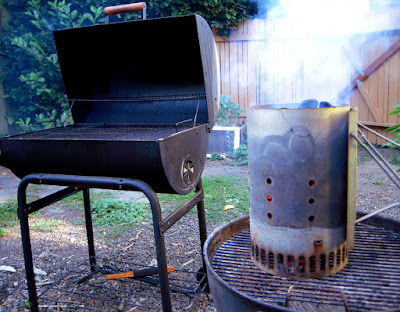 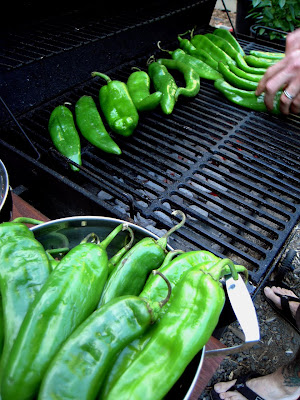 We patiently watched as the chili skins bubbled, boiled and charred. The smell was intoxicating. The heat allows the skins to become hard and turn into casings, while the chili meat steams in the robust earthy flavors and turns supple. 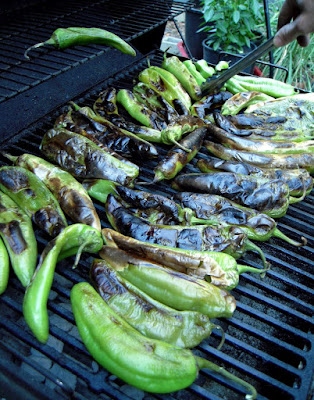 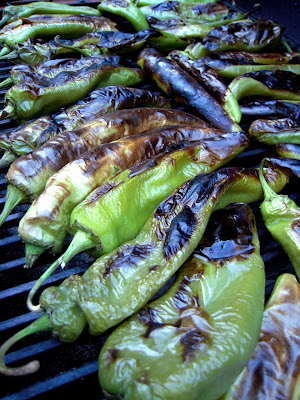 We picked up this tip. After roasting the chilies, placed them whole, laying flat, into a zip lock freezer bag, usually about 8-10 chilies to a bag. Then they can be stored in the freezer flat and taking up little room.

Then when you want some chilies later in the year, take one perfectly portioned bag (for typical recipes) and you simply defrost in 1/4 cup of water. The skins, tops and seed veins peel easily. No need to even chop, mash the peeled chilies in the 1/4 cup water with a fork or potato masher, rendering the chilies stringy compared to chunky. 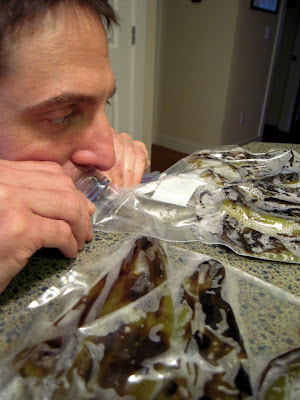 Since we were lucky enough to get some fresh New Mexican chilies we decided to make a green chili quiche to be eaten with tortillas or an avocado salad later in the week. We also wanted to make a crust-less quiche, so the green chilies and eggs could be the star of the dish. Why a quiche verses simply scrambling some eggs with the chilies, which would be delicious as well. Fewer eggs, same green chili flavor and enough for several meals! We started with peeled roasted chilies. 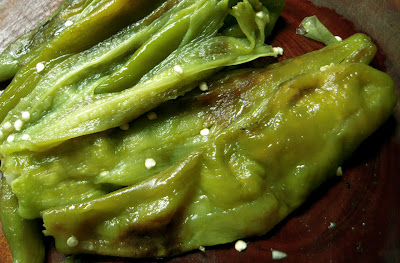 We chopped the green chilies, sauteed an onion and combined them in a bowl. 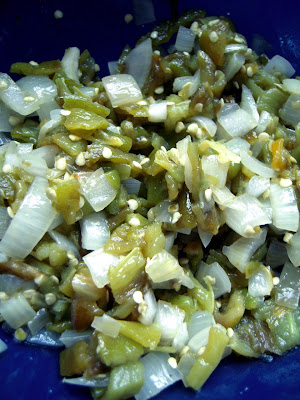 Whisked together 4 eggs and 1/2 cup of milk. Combine with green chilies and onions. Add about 1 cup of shredded sharp cheddar cheese.

Pour into a buttered/sprayed high sided cake pan. We use ceramic souffle pans and bake at 350 degrees for about an hour until the quiche is set and top browns. 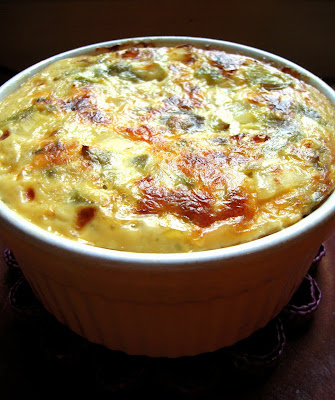 Green chilies have a lot of water in them so the quiche came out a little runny, but nothing too tragic. It tasted fantastic in a tortilla for a quick breakfast burrito. 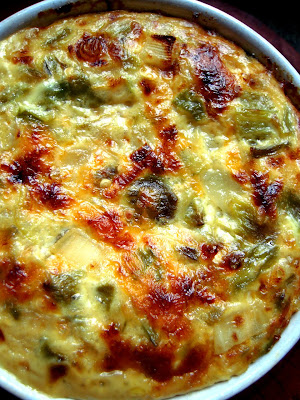