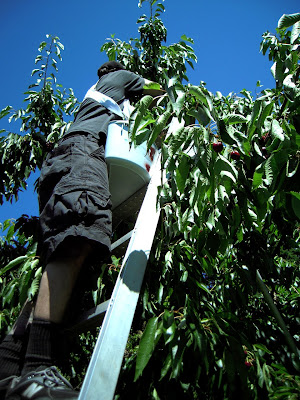 Summer makes us want to stop time and let it stand still for a bit. Since this year's summer started off late, it seems as if we're cramming everything summer has to offer into every free moments we have. With family & friends visiting, a wedding, daytrips and weekend events our summer calendar filled up fast.

Even after a long 6 day work week, with a few doubles thrown in, we got up early on our one day off and piled into the car and headed out to our local farms with one fruit in mind - cherries!

Cherry season is short and when its gone, it's gone. This year's late wet spring meant the fruit season may be short, but by the looks of the overflowing cherry trees there may be some hope for a long season of over indulging in these unbelievable fruit. 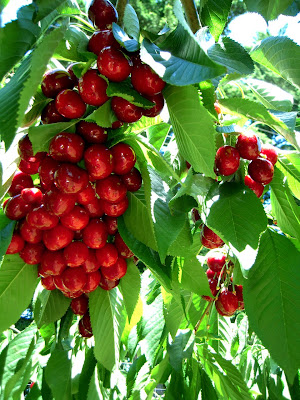 A few weeks ago we broke out the last of our frozen cherries and berries from last year and are ready to head back out to load up on several pounds of cherries. At 50 cents a pound it's a hard bargain to beat, especially when picking cherries is so easy and not far from where we live. We gathered all the cash we had in the house and managed to get around 50 pounds of fruit in about 40 minutes of picking. 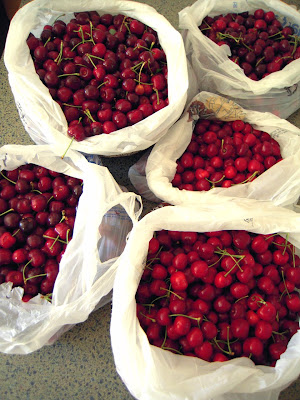 The Schmerber family farms in Snowden, Washington was already sold out on the Teitan cherries (sweetest, plumpest, dark red cherries around), although we still managed to sneak in a few with the help of some strategically placed ladders. The Royal Anns were sold out also, a far superior white/yellow cherry to the Rainier, which was still in picking season but didn't look good. We ended up picking a majority of Vans cherries, some Lapins, some Lambert and some Bing cherries.

We leisurely drove home, enjoying the amazing scenery. But once we got home we immediately washed and began to pit/stone the cherries. As the sink filled up with pits and the large bowl of washed-ready-to-be pitted cherries didn't seem to get any smaller we realized we're gonna need a better system. 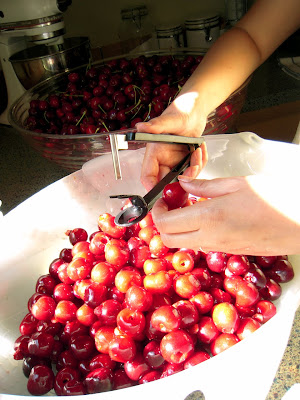 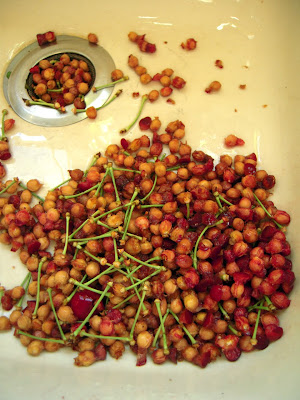 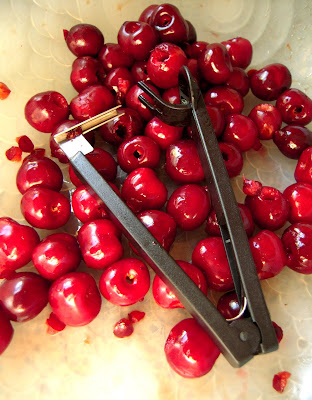 So we biked down the store and bought a fancy cherry stoner which made pitting a dream and much faster than we could have done with the individual pitter. 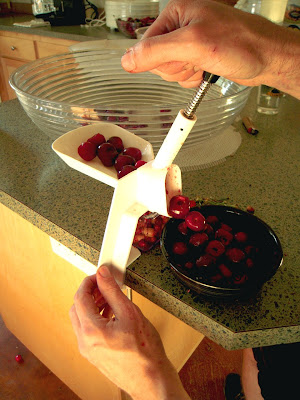 So what are we gonna do with these beauties? After bagging up a few for ourselves to eat immediately and for family and friends, we placed about a few dozen pounds of pitted cherries into the dehydrator. We were lucky enough to have dried cherries for over a year from last year's haul, but that took alot of discipline not to eat them in one sitting. This year we're not going to take that chance and did several rounds of dehydrating and storing for later in the year. 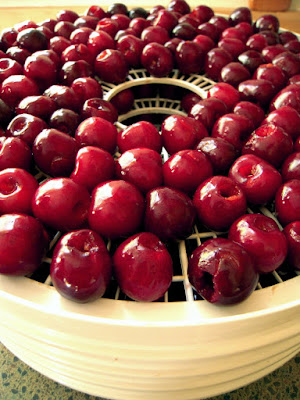 The remainder of the cherries will be placed in a pie, maybe a cream cake or a coffee cake, and we froze 2 quarts of each variety for later in the year. These plumb meaty cherries froze amazingly. Nothing like a cherry tart in the middle of winter!

Fifty cents a pound?!?! I am incredibly jealous. LOVE cherries in the summertime so much!

I remember these... Mmmmm... we ate the bag you gave us in just a day or two. Too easy to eat when pitted!