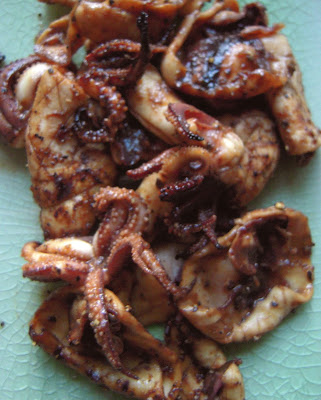 Summertime means lots of meals cooked and eaten outside. With our month long diet of only seafood/fish as protein we were more than happy to find other items to toss on the grill besides our usual hotdogs and burgers. We began looking for recipes and inspiration for some grilling ideas and immediately remembered two items we loved during our travels.

Phu Quoc, a tropical island off the southern coast of Vietnam near the border of Cambodia, has gained a reputation for it's famous fish sauce. The island is slowly gaining notoriety for its seafood and in particular the squid. All the squid we had eaten in Vietnam was tender and juicy compared to the often times chewy and unpalatable squid we get in U.S., making battered fried salted pepper squid the preferred method of cooking. While staying on the island of Phu Quoc we had such a memorable meal that we ended up eating the exact same meal twice! One of those memorable dishes we had was the tamarind squid. The whole baby squids were marinaded in a pungent tart and tangy tamarind sauce and pan fried. 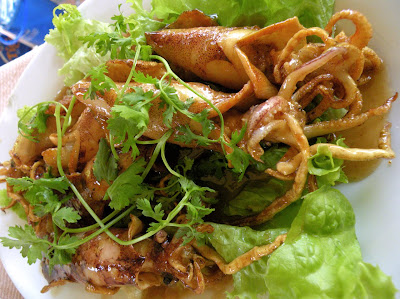 While in Bangkok, Thailand we stumbled upon a make-shift food court outside of the Phetchaburi Market. A man was grilling all kinds of meats on stick and we were absolutely amazed by his butterflied squid skewers. We've hadn't seen anyone grill squid like this and we enjoyed the simplicity of the whole idea. 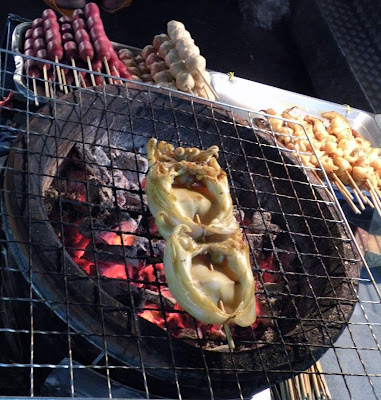 We decided we wanted to try and combine the tamarind squid we had in Phu Quoc with the interesting grilling method of Bangkok. We found some beautiful squids at a Korean grocery store and went home and quickly began cleaning out the squids for the marinade. 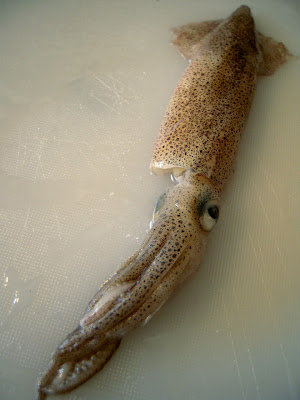 The most difficult part of this whole dish is cleaning the squid. First we removed head and the tentacles from the body. Then we removed the exoskeleton from the body. In Phu Quoc the exoskeleton was left in the squid, allowing the squid to keep its shape during the pan frying. We decided to remove the semi-hard pieces so we could split and have more surface area for the marinade. We scored the body pieces of the squid to give it more texture and so that the squid would curl up when grilled. 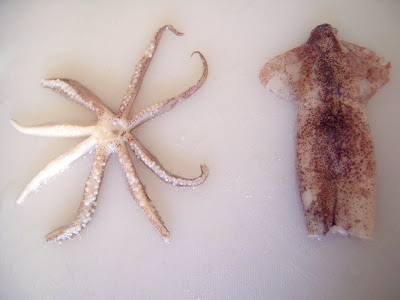 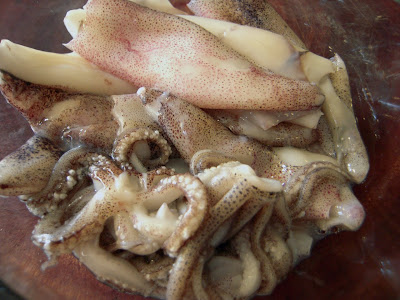 Next we prepared the tamarind marinade by simmering together raw tamarind pulp, light soy sauce, water, ginger smashed into chunks, garlic, fish sauce, & pepper. Simmer until combined and thick, we then strained through a sieve to remove the tamarind pulp, chunks of ginger and garlic. We let the tamarind sauce cool and then marinaded the prepared squid for a few hours. 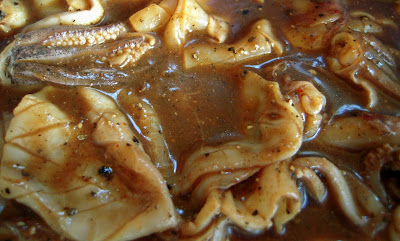 Since we had cut up the squid and not left them whole, we decided laying them in a grilling basket would be the best way to grill them. We continued to apply the remaining marinade on the squid while grilling, which added to the tender and juicy flavors. We grilled the squid for only a few minutes on each side, flipping the squid only once. Cooking time was about 5 minute total! 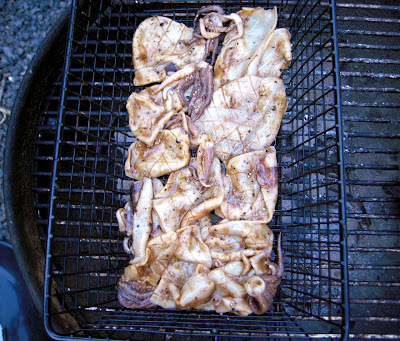 We quickly plated up our squid and ate it in the evening sun with some sugar snap peas and rice. The super fresh squid and the acidic marinade made for terrifically tender squid that was tart and tangy from the tamarind, sweet and salty from the soy sauce and splash of fish sauce and a bit spicy from the ginger and garlic. This is a dish we'll be grilling up for the rest of the summer! 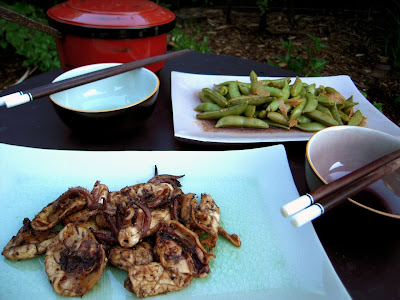 For one pound of baby squid (cut and body slitted)

2 Tablespoons Tamarind Pulp with seed and any peel removed

Simmer in a sauce pan on low heat until thick and thoroughly combined. Allow to thoroughly cool and place prepared squid into marinade and allow to marinade for at least 1 hour.

To grill place in grilling basket, foil, or on skewers and apply any remaining marinade to squid when placed on the grill and again when flipping the squid. Cooking time is very short so don't walk away. Should only take a few minutes on each side - a total of 5 minutes or less total cooking time. Enjoy with your favorite light summer time vegetables and rice!

This is our entry into this month's Delicious Vietnam Blogging Event, hosted by yours truly, Buddha Bellies. A food blogging event started by Anh of A Food Lover's Journey blog and Hong and Kim of Ravenous Couple. 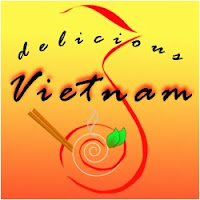 Stay tuned all the entries for Delicious Vietnam Blogging Event to be posted right here shortly.

Looks fantastic! Can't wait to read everyone else posts!

Here's the deal. I am coming to your house sometime between September 9-12th and you are making this for me... End of story....