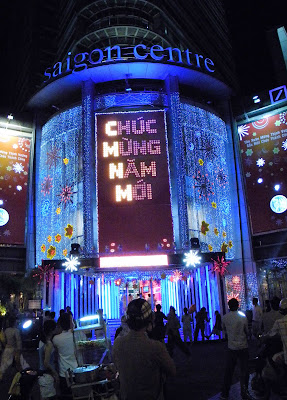 A little over a year ago we spent 47 days in the country of Vietnam, with the majority of our time spent in Saigon. Fast forward to 2010 Tet celebration and we find ourselves with a little over 3 days in this city, 2 days in the beginning and 1 day at the end. Needless to say we didn't waste anytime getting up early the next morning and heading straight out. But not before indulging in the free hotel breakfast of pho. 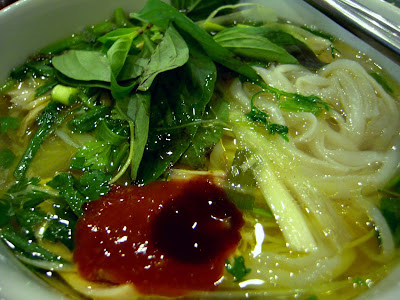 The hotel cook couldn't praise her pho making skills enough, between us the chicken pho rocked and the beef pho was awful. Surprisingly the hotel pho was the only time we partook in this well known Vietnamese treasure. Why? Because there is so much good food in Vietnam and in Saigon it's all about the international foods as well as the traditional Vietnamese dishes.

There are two items we dream about when we think of Saigon, sushi and Donner kababs. Strange, we know. Granted we know both items aren't the best we will have in our lives, but at SE Asian prices, it's as good, if not better than what we can get back home in the states for pennies on the dollar. We strolled the streets of Saigon heading back to our favorite shops and soaking in the New Year's Tet street decorations and markets set up especially for Tet. 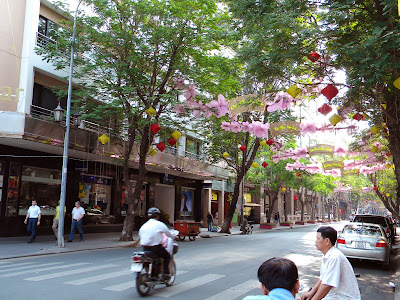 Sadly we found a few of our favorite places had either relocated or went out of business completely. We had a list of places we wanted to visit such as the famous lunch lady seen on Anthony Bourdaine's show No Reservations and Lon Suong Beer Hall, one of Time Magazine's top beer halls in the world. But with so little time we had to make heartbreaking decisions on what to cut out. And sushi was not one of them. 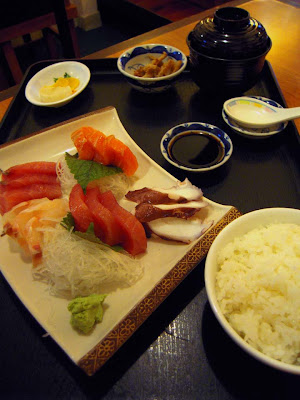 Yes, we did take a lot of heat for seeking out sushi in Vietnam, but let us put this in relative terms. The average cost of a chirashi bowl back home is around $12-$14. Just a bowl of sushi rice and usually chef's choice cuts of fish. Well that same bowl of sushi costs around $4 in Saigon, with the selection and quality of fish and sushi rice to be as good, if not better than what we can find at home. Plus check out the bento lunches for around $5. Catching our drift now?

The top picture is of a cold soba noodle bento box (check out how the noodles are on a bed of ice) along with tempura, triangular rice with pickled ginger, dashi and accompaniments. The bottom image of the dashi based soba with greens and tempura bits on the side was HUGE! 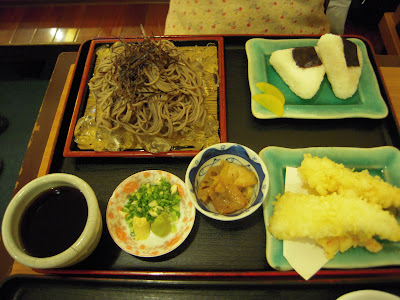 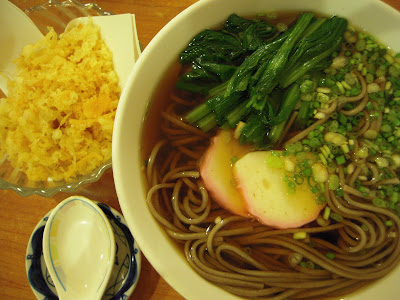 Sushi restaurants are everywhere in Saigon's main shopping districts, our favorite revolving sushi place was gone, but we were able to find this one on Nguyen Du Street who served up a mean okonomiyaki or Japanese pizza - Hiroshima Style, layered not mixed and with a layer of raman noodles - filling and delicious. 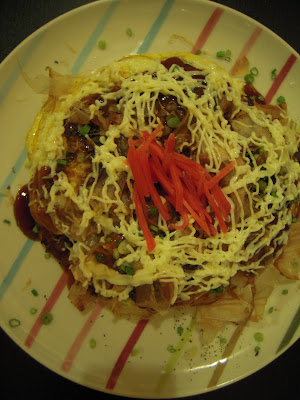 While traveling in Japan we had fortuitously come upon an outdoor okonomiyaki vendor and we were so blown away by this "Japanese Pizza" we even blogged about it here. The version we had in Osaka is considered Kansai or Osaka style with no noodles, with the cabbage, flour, eggs, etc. mixed and not layered. This lunch sustained us for the rest of the afternoon.

Being Tet New Year the shopping district was quiet with many shops closed for the New Year, but we managed to take a peak in handbag retailer Ipanema, Art Book, Creations Silk Clothers and the Tax Department. As the sun went down we decided we were still full from our sushi lunch, but could use a refreshing drink. Hhhhmmmm, we knew just the place - a little roof top bar at the Rex Hotel, the scene of a recent proposal.... 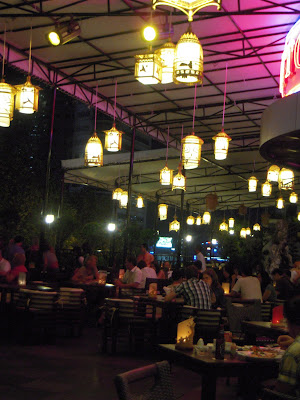 We indulged in pricey drinks on the breezy roof top bar, but hey we were celebrating our first day back in Saigon! 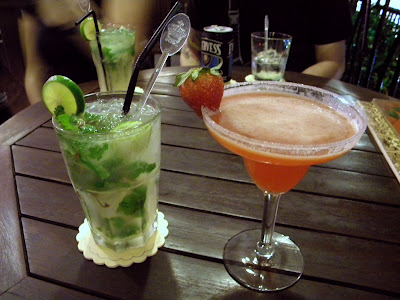 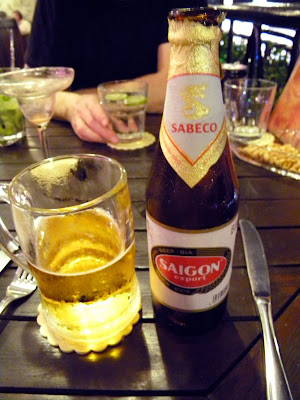 We decided to split an order of egg rolls and they came toothpicked to a hollowed out pineapple with a flame at the base, very interesting. We later found this pineapple flame creation used as an air-fresher/mood lighting in a cafe bathroom, funny stuff. 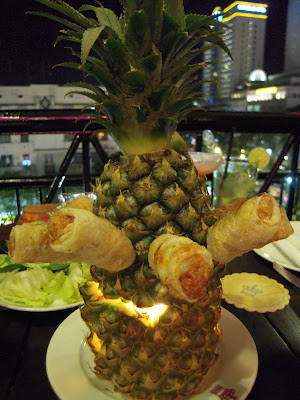 Not quite hungry, but definitely not ready to call it a night, we headed out into the festive streets below and found the most random set of vendors selling New Years themed items. 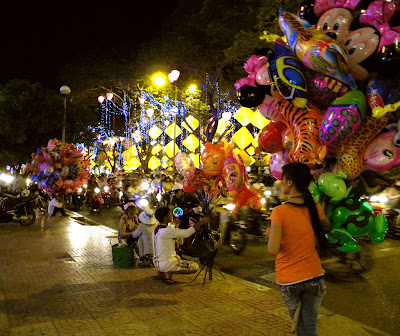 We decided to head over the Opera House and check out a bar in the basement of the Opera House called Q Bar, a trendy night club DJ Saigon was hoping to be able to spin some tunes. But the owners were kind of tools and we ended up paying for more spendy drinks. 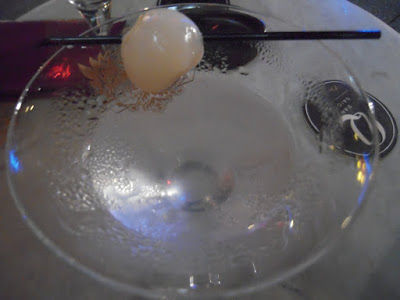 It was getting late and we were now beginning to get our appetites back, so we decided to head over to the Night Market at Ben Thanh Market and see what the food carts were offering. We kept our eye out for Donnar kababs, but the cart had already shut down, so we opted for a row of restaurants that sold various soups, beef stews and late night eats. We pulled up a plastic seat and quickly yelled out our order to whomever cared. Light, tastey, quick and cheap - a good way to end our first full day back in Saigon. 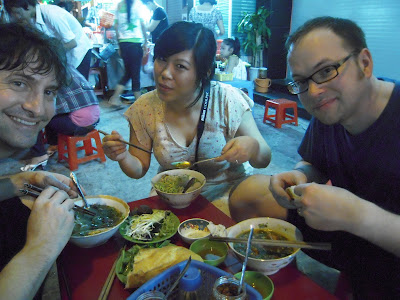 Oh and we also got our very dusty shoes shined while waiting for our food. 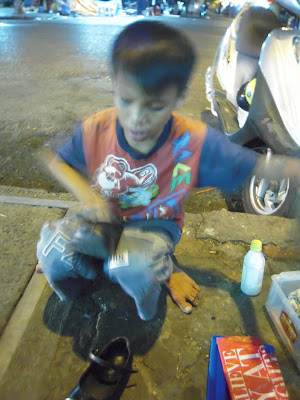