It's that time of year again - ROCkTOBER! In early fall into Halloween Portlanders are treated with an array of concerts and shows. As summer slows down the music scene ramps up!

Once upon a time the organizers of SxSW, the annual music festival in Austin, Texas collaborated with our local weekly newspaper Willamette Week to bring us NxNW. After years of misorganization, miscommunication and overall disaster for some of the artists Willamette Week pulled out and went on their own with MusicFest NW, a 4-day music festival strung out all over the city of Portland.

About a month before the festival was set to begin the line-up was unveiled and we began a preliminary list of the shows we would like to go to. We added up the costs of the individual shows and determined getting a wrist band would be cost-beneficial. However, time and more summer guests determined we were only free one night of the 4-day event.Panda Bear,Major Lazer,NoMeansNo and Shonen Knife would have to wait for another time. We did stand in line and saw Man Man perform at the Hawthorne Theater. The worse venue for an all ages show EVER. 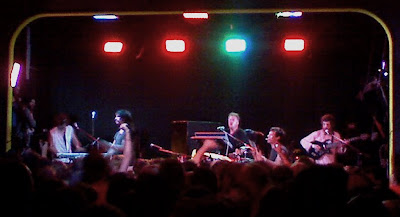 The flat showroom, divided all-ages/21+ floor was a disaster for anyone under 6 feet tall. But it was Man Man! Xylophones, noisemakers, horns and the drummer placed in the front of the stage. The opening band Morning Teleportation - a local avant/folk band mezmorized us just in time for Man Man to take the stage. Another must-see band checked off our list!

A few weeks later we headed up to the Mt. Tabor Theater to see living reggae legend Richie Spice. We arrived as the first opening act came on so we headed down the hallway to the bar where the drinks were half the price! 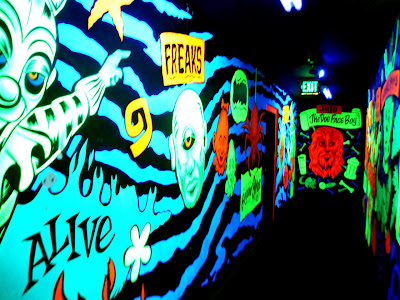 The Mt. Tabor Theater was once a movie theater so it didn't seem off when the bar had a separate DJ spinning rockabilly in the adjacent bar. It also fit with the Tarantino Grindhouse style movie Hell Ride. The music matched perfectly with this gritty and violent movie, which we were kind of happy we didn't have to actually listen too. 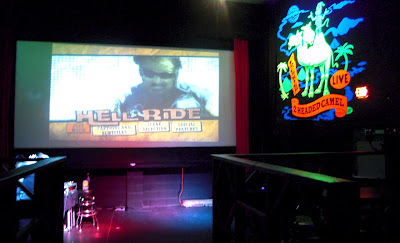 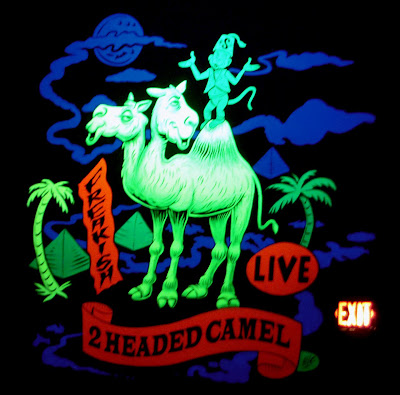 We headed back to the main room to watch Richie's younger brother perform a short set then Richie hit the stage! 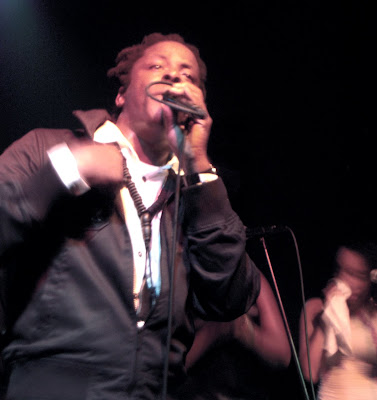 Richie Spice had a great backup band and terrific backup singers. Richie seemed a bit dazed. These Jamaican performers come to Portland and just can't handle the Pacific NW green, he was a bit sloppy and at times seemed like he was somewhere else, but he sounded great and the show was fantastic! 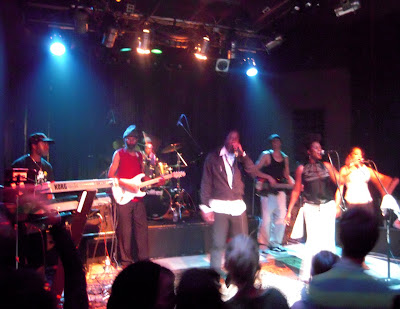 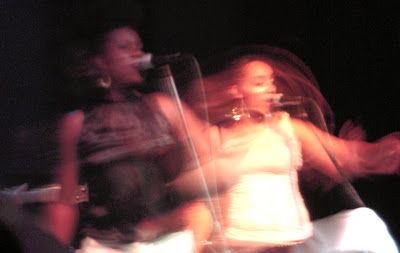 One of the most anticipated shows this season for us was the M.I.A. show at the Roseland Theater. A year ago M.I.A made her way through Portland supporting her album Kala and after hearing how she ruled the techno tent at the Coachella Music Festival, we were bummed when we missed her. This year we made sure to pony up for the $25 ticket + a $6 handling charge.

We arrived a little over an hour after the 9pm ticket call time to a PACKED venue and blaring stage and light show. It died down and we were happy thinking we made it just in time. We grabbed a couple of drinks and headed over to get a better view. What we saw was a bit shocking.

First, her "back-up dancers" looked like they were the younger siblings of some friends that she thought "sure, why don't you come along and be my backup dancers". Seriously terrible or maybe white kids from Britian can't dance no matter how much time they spend in the clubs. 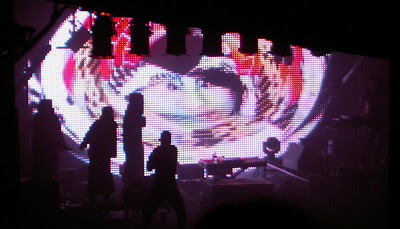 Second, we were surprised by how sparse her stage was. But thrilled to see she decided to place all her money for the show into a huge sound system and light screen that turned her song Born Free into a bloody mess - it was awesome. If you want to see the video for the song, it may give you an idea of how she managed to capture the theme of the song and video in her performance. 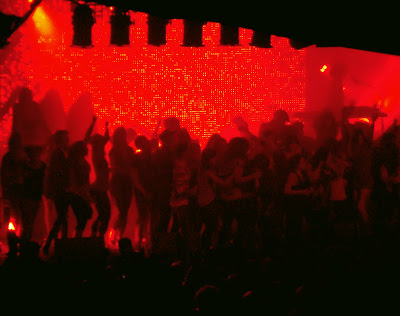 Here's a shot of the loud speakers and subs on one side of the stage. The heavy bass sounds were perfect for being up in the balcony, since all you can usually hear upstairs is the bass. 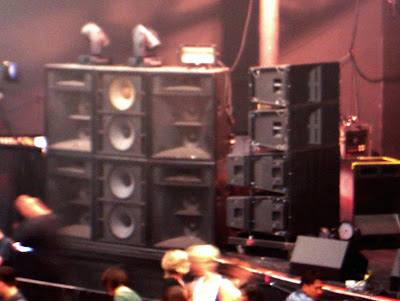 Within a few songs M.I.A. had the whole place bouncin' like a Jamaican Dancehall with people bumping and grinding on the stage, including Miss Maya herself. Eventually she found her way to top of those banging speakers. 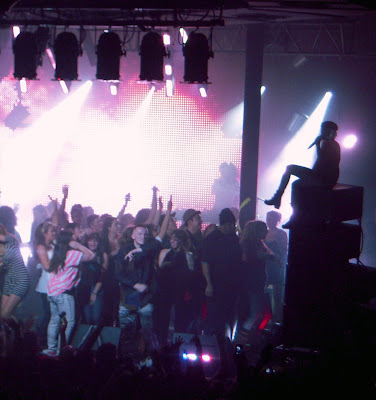 We had greatly anticipated this show and after 35 minutes it was over. O-V-E-R - Over! NO F%&KING WAY! Yes! Then an announcement was made that M.I.A would be DJing at the Crown Room for an additional $3 cover charge. We couldn't believe M.I.A. had pulled a Lady Sovereign! A few years back we had seen Lady Sovereign at the Wonder Ballroom play a short 40 minute set and then dared to say she was DJing at the bar downstairs for an additional $10 cover. We left pissed and highly disappointed at how short the show was. What songs she did play she reinvented which was cool, but she didn't even play one song off her first album! Musicians...so fickle.