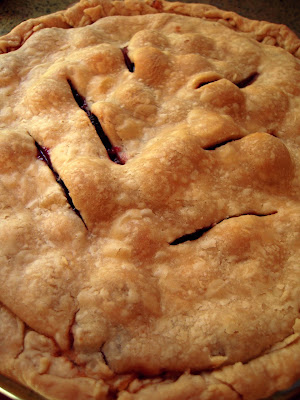 For the record, only one of us grew up eating home made fruit pies, with the other set of parents using their oven as storage for woks and frying pans, so homemade baked goods is something only one of us experienced growing up. However we are here to say making is pie is easy.

This past weekend was a busy one with family in town for a wedding, it was upon us to entertain the whole southwest clan and for dessert we decided to treat everyone to our hand-picked cherries in the form of a pie!

Granted the beautiful local cherries we picked made the pie that more easy, but all in all pie is pretty easy. Yes, we were intimidated by the idea of making our own crust, but as I said earlier - pretty easy. The most unsure we were about the pie was when the recipe called for cooking the cherries to a soft consistency. What?? Cook fruit?? And such beautiful fruit too. 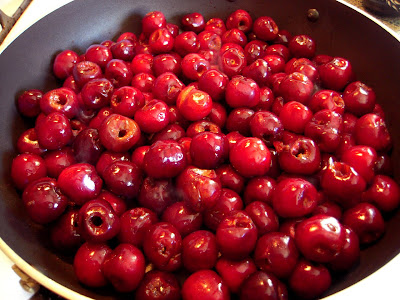 After cooking down the fruit to what we deemed "soft", we didn't want mush, but these plump cherries weren't going to go mushy in the few minutes of heat; we added a mixture of flour, corn starch, instant tapioca, sugar, cinnamon, and a small pinch of salt. 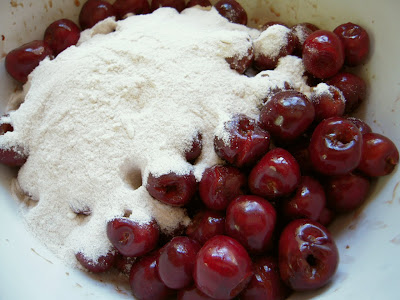 The heat from the cherries turned the dry ingredients into glossy gooey bowl of heaven! 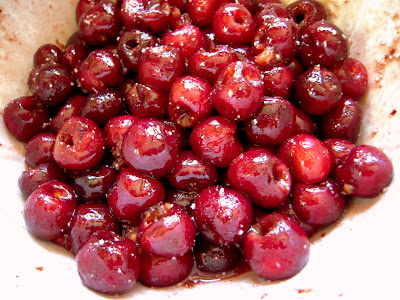 At this point the smell of the sweet cooked sugared cherries was hard to resist. We could have easily poured this mixture over some ice cream or hell, just in a bowl and eaten straight up. But no, we wanted pie... 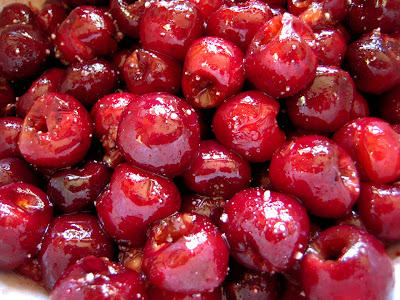 The pie cruist was the most difficult part, next to maybe pitting the cherries. If you use cold butter, cold shortening, and cold ice water and a cooler room in the summertime, you too can have 1/8-inch pie crust ready for a sweet fruit filling too! 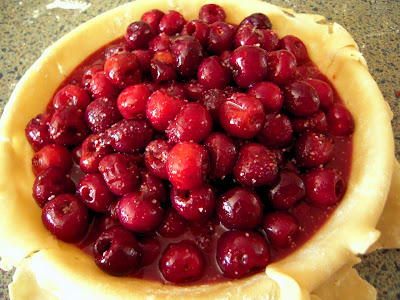 We decided to bake the pie hours before everyone arrived for our jerk chicken bbq bonanza! Which worked out well since it gave the pie some time to rest and the filling to solidify.

The meaty cherries remained plump and the flour, corn starch and tapioca mixture allowed for a thick sauce that wasn't syrupy and sickenly sweet due to small amount of sugar added. It was delicious and made us think of other things we can stick inbetween two rolled out pieces of dough....hhhhmmmm.....

For the Crust (we used a food processor) pulse together flour, salt, butter, shortening until mixture resembles course meal. Add 5 Tab;es of ice water, a little at a time, Mixture should form a ball. Divide into two equal halves and flatten into a disc. Wrap in plastic wrap and refridgerate for at least 30 minutes and up to 3 days.

In the meantime, for the filling:

In a small bowl mix together sugar, tapioca, cornstarch, salt and cinnamon. In a large heavy skillet cook cherries over medium heat, stirring until slightly soft, about 2 minutes. Transfer cooked cherries to a heat proof bowl and add sugar mixture, stirring until thickened and well coated, about 3 minutes. Stir in vanilla extract and let cool.

Preheat oven to 400 Degrees and remove chilled dough. On a lightly floured surface, roll each disc into an 11-inch round circle about 1/8-inch thick. Line the pie pan with one layer of rolled out dough. Spoon the cooled pie filling into the pie pan with dough. Dot all over the mixture with butter pieces. Cover the top of the pie with the other half of the rolled out dough.

To flute and close up pie moisten the edges of the crust and flute the edges. (We just rolled the edges over each other for a clean seal) Cut slits into the top layer of dough to allow steam to release during baking.

Place pie on a baking sheet to catch any filling that may bubble and boil over. After 15 minutes, lower the oven temp to 350 degrees and foil any edges of crust that look as if it may be browning too fast. Continue to bake at 350 degrees for 45-50 minutes or until pastry is golden brown and the filling begins to bubble.

Transfer to rack and allow to cool (3-5 hours).

We served ours with both ice cream and whipped cream! Enjoy!