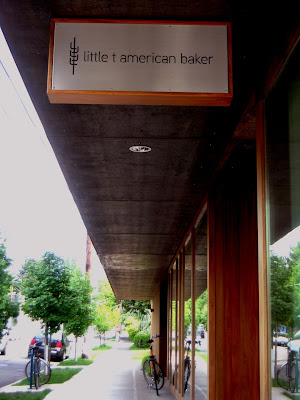 2009 was year of the sandwich, or is it 2010...either way sandwiches exploded onto the Portland food scene with everyone making quick declarations of their favorite sandwiches and where to get them. This meant an explosion of artisan breads and bakeries to go with these sandwiches. Therefor it seemed natural a local culinary star would branch out on his own and Little t American Baker was the result of one of these break-outs.

The baker at Little t American Baker was once the baker at Portland institutions Pearl Bakery and Kenny & Zukes. We decided one lazy Sunday afternoon to stop into the sleek modern bakery for a breakfast sandwich before continuing on with our weekend errands. 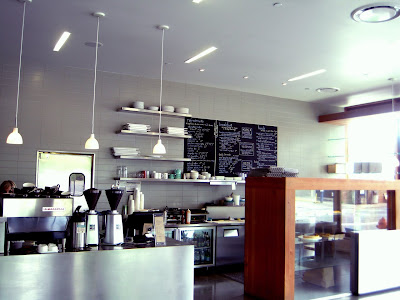 Unfortunately for us breakfast items and their amazing assortment of baked goods is only available on the weekend, so we would have to come back and try their lunch sandwiches prosciutto & asparagus on slab and spring vegetables & lemon aioli on seeded hoagie.

Since we were already there we did decide to grab a cup of coffee and two breakfast sandwiches. One sandwich we tried was their house cured coho lox on hearty spelt bread. The lox were melt in your mouth oily goodness. The large capers and squeeze of lemon opened up the flavors of the salmon, while the spelt bread was spongy, hearty and balanced out the fish well. 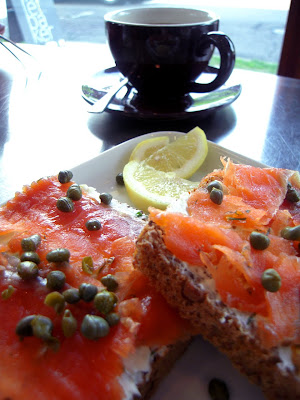 Our other sandwich was a croque madam, a beautifully fried egg on top of ham and a bread dubbed the "sally lunn" which was like french toast, but not sweet. This was also stellar. The bread held up well to the egg and ham and was not overpowering or bready. 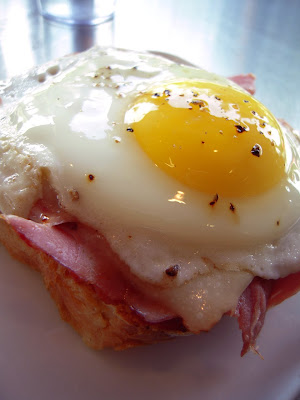 Knowing this was a bakery and not a cafe, the minimal setting was actually pleasant with a built-in bar all along the floor to ceiling windows, in a new modern building, in the hippy Clinton neighborhood. Due to the fact that we were there later in the afternoon, the bread and baked good selection was pretty sparse. We did see two cars pull up, driver remaining at the wheel and passenger jumping out to grab a couple loaves of bread. So that must mean the bread alone is worth a trip. But we were satisfied with our mid-afternoon snack and passed on getting breads to take home. We're not big bread people so committing to a spendy artisan bread is a lot to ask of us. We will definitely be back to try their other sandwiches if they are anything on par with these sandwiches. Little t American Baker

I am loving this blog so much. Really fabulous and I'm now a for sure follower... Don't stop. it's great. keri a.k.a. Sam