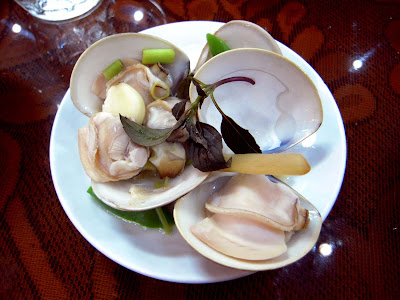 DaNang is renowned for its large seafood emporiums along its famous long stretch of beach. After a wonderful afternoon of sightseeing we were treated to a large seafood feast! These seafood emporiums are hard to miss along the famous China Beach stretch, mainly because the restaurants are huge and occupy the beach side of the main road. So you can dine beachside or inside the large dining halls.

Upon arriving at one of the dozens of restaurants lining the boulevard we were given a table inside and our host immediately order a whole rack of Heinekens. Ok, it's gonna be one of those multi-course dinners. And it was difficult selecting what those courses would be with the extensive menu that had everything you could think of when you think "seafood". 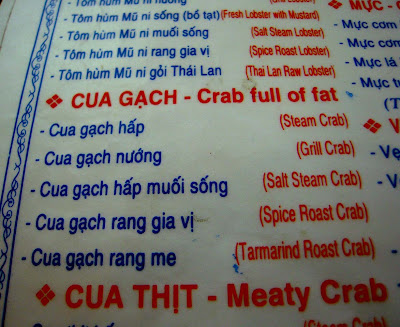 We knew we were in for a serious feast when the first things to arrive was metal buckets for inedible bits and pieces, lime with salt and pepper for dipping, and plates of greens.Slowly the food started to arrive at the table, starting with a cauldron of steamed clams in a herb bouillabaisse. 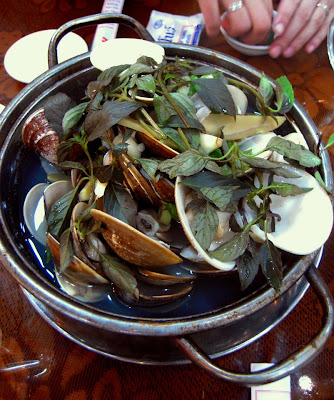 The fresh clams were salty, meaty and juicy, couple that with the ginger, oniony and earthy herbed bouillabaisse. All we needed was a place to chuck those shells!

Soon a crab dish and grilled squid arrived at the table. Even though the squid was fresh, the chewy grilled consistency was a turn off and we ended up handing these over to the adults who like having food grow in their mouths with every bite.

Next came the utterly heavenly grilled oysters. We have no idea what this entree cost, but it was worth every penny. Succulent, creamy and tasting of the sea, yet smokey from the grilling, these were fantastic! 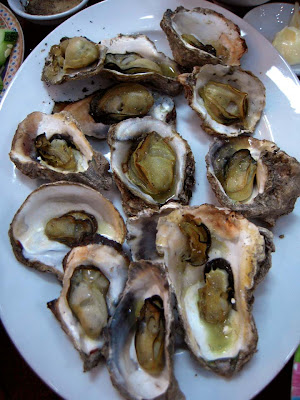 Between all the side dishes, accompaniments and beer we were stuffed by the time the fifth and final dish arrived. We quickly claimed, as to not offend our hosts, that we were stuffed, but will try the red snapper steamed in chilis, garlic, onions and spicies. 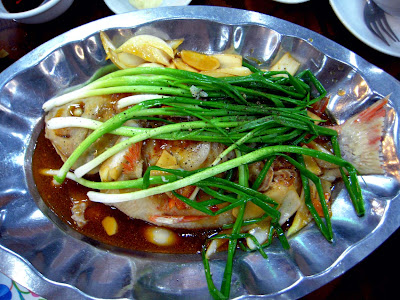 Somewhere between pulling the first piece of delicate white meat away from the bones in large chunks and flipping the fish over to get to the other side of the tender perfectly steamed fish our appetites came back and we easily finished our red snapper. Seriously delicious and a great end to our seafood feast.

While traveling through Vietnam a year ago we had planned to stop in DaNang for a few days, but decided to head to Hoi An instead because the beach didn't look very nice and the town of DaNang looked, well, boring. We knew one of the big draws to visiting DaNang was the seafood and especially the large seafood emporiums. Had we experienced this before we would have definitely made a pitstop for at least a seafood feast! Now we know!