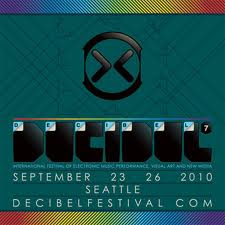 Any festival that has the word Decibel in it must be serious. And yes, the Decibel Festival is a serious music and arts festival held all over the city of Seattle. The festival is a "4-day annual festival with workshops, panel discussions, visual arts and cutting edge electronic musical performances." The conference/music festival has lectures on such topics as "The Ill Methodology". There are scratch workshops, industry panel discussions, film events and different electronic music style showcases.

The musical acts are from all over the world and the most relevant electronic producers to date. The 2010 line-up includes Modeselktor all the way from Berlin and the incredibly talented Flying Lotus from LA, the nephew of jazz musician Alice Coltrane. We won't be able to go to any of the shows, afterhours or to the Pike Street Fish Fry, an English style fish & chip joint conveniently nestled between two of the large venues and open until 2:30AM!

So in memory of 2009's festival and celebration of 2010's, here's an awesomely creative and cleaver video of our favorite show from last year's Decibel Festival - Benga! Go ahead and sing along, you'll know the words by heart after about 20 seconds. Enjoy!