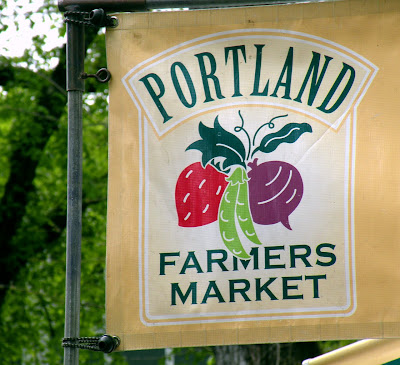 We love, love, love open markets. And springtime in Portland means outdoor markets and events until the last colorful deciduous tree leaf has fallen in late autumn. The first day of the Portland Farmers Market in the downtown park blocks usually is the only day the whole year we actually go to the big downtown farmers market due to us not liking the large crowd and over-priced items. 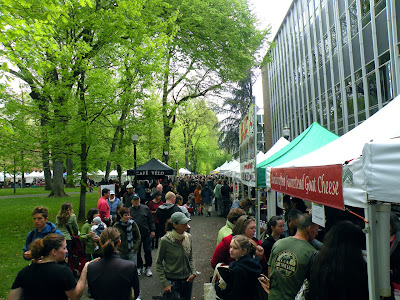 The farmers markets used to be affordable, but the day they started to sell $2 cucumbers we knew we'll come to the downtown market for breakfast, unique plants for the garden and a good excuse for a bike ride, but days of coming down to the market for a weekly grocery trip are long gone. However, if you are looking for some unique plants for your garden, be it a herb garden, vegetable garden, shade garden or flower garden, the farmers market is a good place to go. 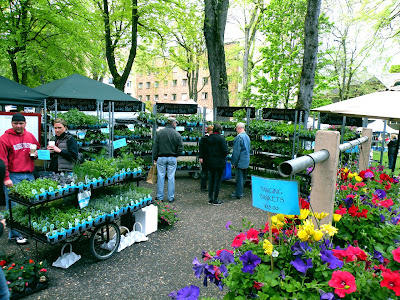 We've found some unique varieties of vegetable starts for our garden here such as pineapple tomatillos, a huge variety of heirloom tomatoes, and if you haven't had a proper heirloom tomato, you're seriously missing out; exotic chili peppers and herbs, such as chocolate habeneros, japanese perilla and lemongrass. It's also nice to know your money is going directly to the people who grow your food.

The Portland Farmers Market is a great place to go for breakfast as well with many neighborhood restaurants getting their feet wet at the farmers market, such as Pine State Biscuits, with their ridiculously long lines at their SE Belmont store, only rivaled by their farmers market line that practically looped around the Portland State University library building. They sure looked good, but we couldn't muster up the energy to stand in line. 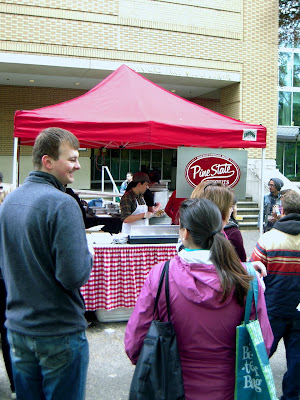 The Saturday market has been expanded and it's much easier to wander through the rows of fresh produce, locally made prepared foods, pastries and treats. The Portland Farmers Market has 3 weekly markets: 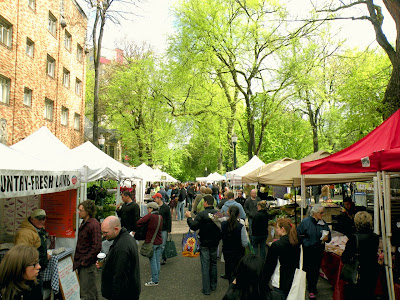 So where do we head to if we do want to pick up something special to throw on the BBQ or the freshest, yet somewhat expensive ingredients for an exotic dinner? We head to one of the many other farmers markets held in various neighborhoods throughout the city, such as our local King Market held at King Middle School in NE. And it was a glorious sunny day opening day and the hipsters were even out at the park playing kickball! 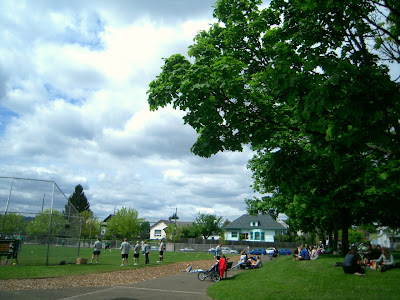 The King market only started last year and is still growing in size, but that means the produce is much more affordable, even the organic items! 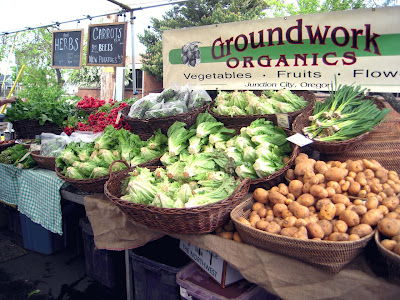 But if we want to do some serious farmers market shopping we head to the Hollywood District's market. In between the size of the Portland Farmers Market and the cute little King Market, the Hollywood Farmers Market is more manageable, hasn't gotten too big and has a great selection of vendors. 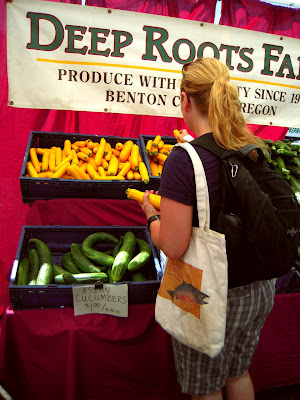 The Hollywood Farmers Market is situated next to the Grocery Outlet parking lot, across the street from the new Whole Foods and around the corner from the newly remodeled Trader Joe's. Who said you can't get it all in one place? 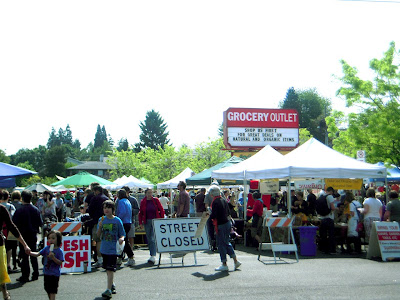 But with such interesting varieties of local produce and beautiful rustic displays there's really no need to go to a grocery store. 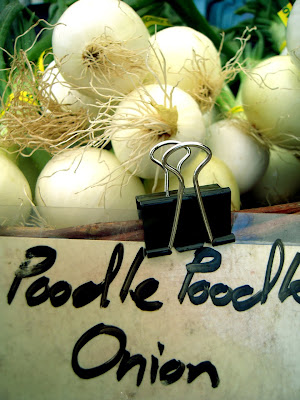 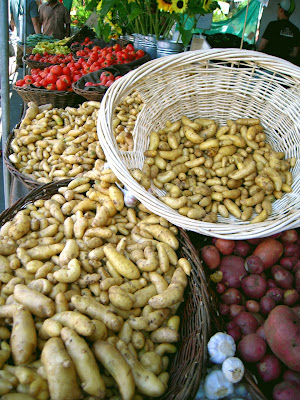 About a month before the farmers markets started we jumped off our spring market fever with the big Crafty Wonderland Art and Craft Extravaganza Super Colossal Spring Show. 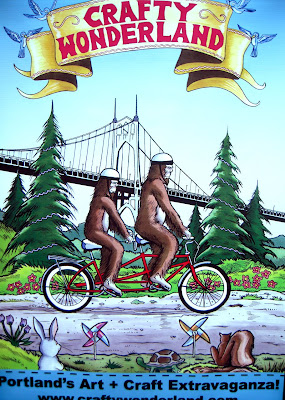 Held in the convention center twice a year, once in the spring and once before Christmas, Crafty Wonderland is a collection of local arts and craft makers selling everything from dye cut cards (a personal favorite this year), the best collection of odd, funny and ironic t-shirts, jewelry, artwork and clothing, all personally handmade. 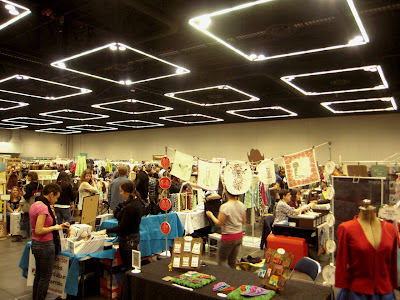 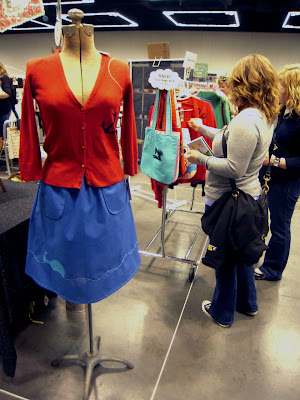 Weeks before the official outdoor market season started and only a week after the Crafty Wonderland spring sale, Portland's local French/English school was host to its annual French Market on the grounds of the school. 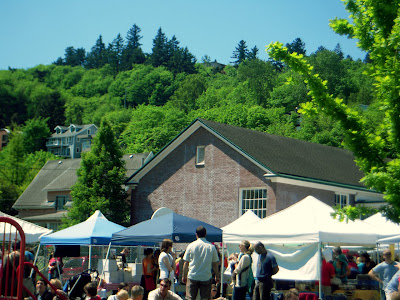 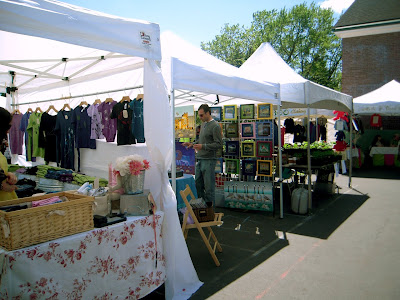 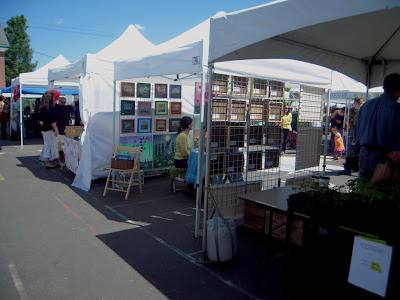 There was a wine vendor selling classes of french or local wines, however we were hoping to get french inspired food at the market. There was no produce vendors, but there were a few food vendors and yes - a crepe vendor! We think it belongs to the school because of it's cute awning and mural on the front. 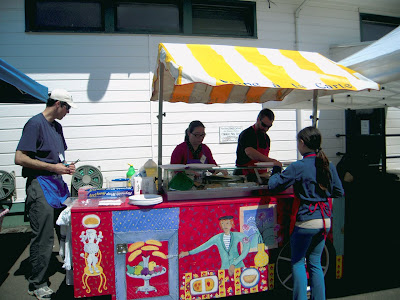 We were hoping for an inspiring authentic crepe that would make us run out and find the perfect ingredients for a crepe dinner, but what we got was a bland mush wrap with skimpy and average ingredients. Tres decevant!

It's hard to believe that its only mid-spring and we have already done and seen so much in our beloved city. So to our surprise last weekend as we were biking over to meet a friend for lunch, we ran smack dab in the middle of the Alberta Street Art Hop. 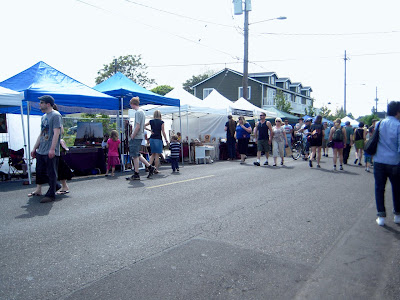 Not very arty and more hoppy, a large portion of Alberta Street Art Hop consisted of many items and artist found at the local Saturday Market downtown. It was a nice afternoon so we decided to bike on by.