Bangkok: Shoppers' Paradise and much more

Imagine the best vintage and antique shops in a partially outdoor and partially indoor market where you can haggle over the price of clothing, arts and crafts, bags, sunglasses and basically anything you want. 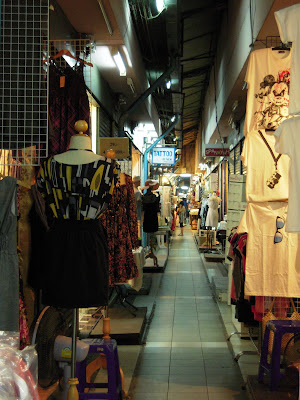 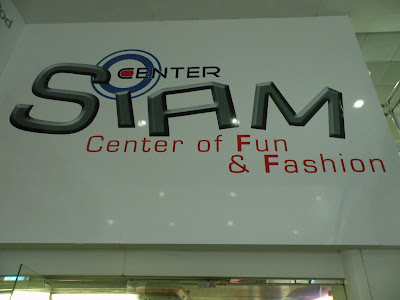 That is Bangkok shopping in a nutshell, in other words Shopper’s Paradise. There are outdoor markets open during the day with thousands of vendors and night markets with another thousand vendors, there are wholesale markets, people selling items on the sidewalk, along the pier towards the river ferries – EVERYWHERE. And the best part it isn’t all the same stuff, but enough that we got a good idea what things were worth and what to offer when bargaining.

Some of our favorite markets were the Mahboonkrong or MBK, small inexpensive stalls that sold t-shirts, cell phone accessories, handbags, knock-offs and unique clothes and toys teenagers love. Connected to the awesome Japanese department store Tokyu Hands. It is in an air conditioned mall right off the BTS near Siam Square. But the mother of all shopping we found was the Chatuchak Weekend Market. Huge, with over 15,000 stalls of unique interesting clothes by local designers, crafts such as masks, carvings and leather goods, and food vendors throughout. We were so busy walking around among the shoe shops, jewelry stores, clothing stalls and home décor shops that we didn’t even bother taking out our cameras. 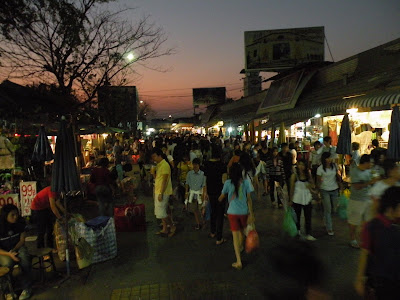 Not completely shopped out we headed to the huge night market called Suan Lum Night Bizarre. Another fantastic open market selling everything at bargain prices and with a terrific food court where we had to buy tickets in the particular dollar amounts and chose from around 100 different food stalls. It was too dark to take pictures at this time and we were too distracted by the entertaining, yet strange Thai pop band on stage at the end of the covered dining area.
When we said markets are everywhere we really mean it, there are night markets set up everywhere. Behind both of the hotels we stayed at were markets one set up at night and one permanent structure that spilled out into the street at night – amazing! 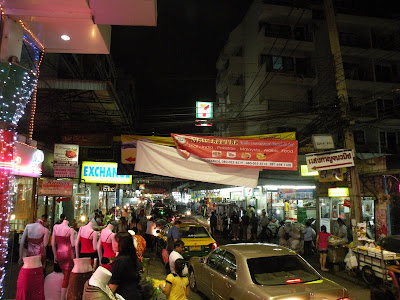 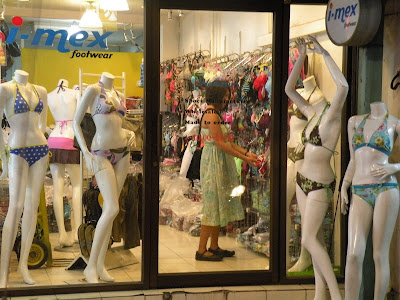 We couldn’t go to Bangkok and not go to its famous red light district, which had it’s own night market of course. 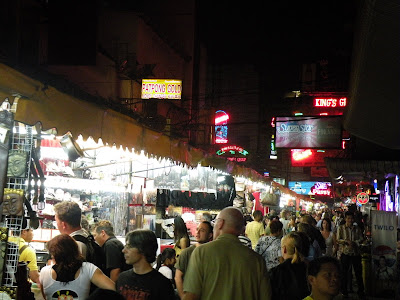 Known as the Patpong district, it is home to go-go bars, sex shows and Boy Alley. 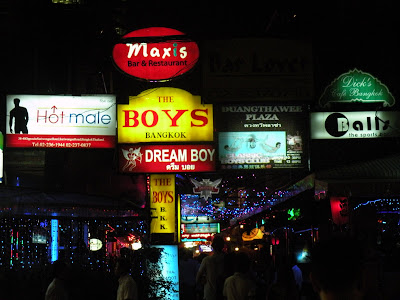 It actually is tamer than it sounds and we saw tour buses full of tourists go by every few minutes. Thailand - Bangkok in particular, has been known as a top destination for sex tours. There are several reasons for this: the general no judgement attitude of the Thai people, the lack of laws and enforcement of anti-prostitution laws, a 1966 law still in effect today, allows "special services" to be rendered at legal establishments, such as massage parlor, go go bars, hostess bars and tea houses, and the vagueness of the meaning "special services" has allowed the a fairly legal setting for the sex trade to take a hold in Thailand. We read about plane loads of Germans coming to Bangkok for weekend benders.  What resulted in decades of exploitation of young girls coming from the country-side for employment in the city was the common scene of old white European men and young beautiful Thai girl couples, something we got tired of seeing after awhile. But one interesting aspect was the boy-girls. Beautiful transvestites that worked in the go-go bars and in special shows. The go-go bars in the famous Patong district in Bangkok was filled with bored looking girls dancing and constant touts trying to get us to go in to view a “show”, approaching us with cards like the one below. Don’t worry mom and dad we didn’t go in.
Posted by Buddha Bellies at Friday, February 27, 2009